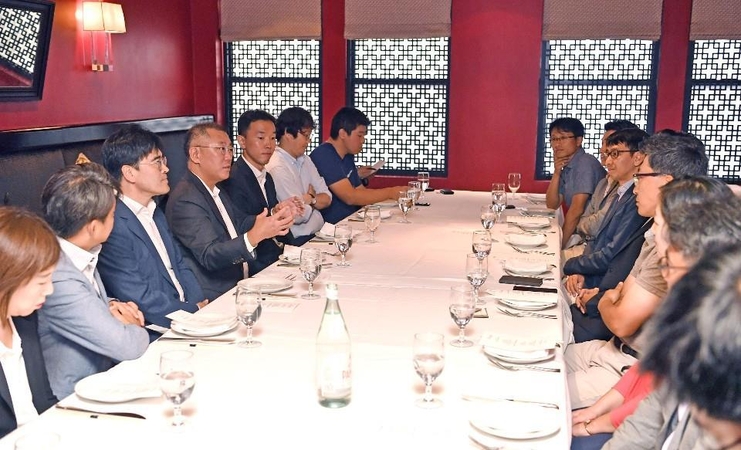 South Korean carmaker Hyundai Motor Group will start mass production of self-driving cars within the next five years, said Chung Euisun, the heir to the auto giant, as he made a hefty investment in a joint venture the company established with Aptiv on Monday (local time).

At a luncheon session held in New York with Korean correspondents on the same day he signed the $4 billion deal with the US software developer, Chung said the company would apply the autonomous driving technology to be developed jointly with Aptiv to Hyundai cars starting in 2024. The executive vice chairman, who holds the second-highest position in the carmaker -- his father, Chairman Chung Mong-koo, is No. 1 -- said the company had decided to hold the same number of shares as Aptiv, rather than be a minority shareholder in the venture, in an effort to transform itself from a mere car manufacturer into a future mobility solutions provider.

“We expect the era of autonomous vehicles to come early but it will be possible for customers to go anywhere they want in a driverless car after 2030,” said Chung, who has taken the lead in the absence of his ill father.

Chung sat down for a group interview after the company announced the joint venture. Later in the afternoon, he attended a signing ceremony held at Goldman Sachs’ head office in New York.

Under the deal, the Seoul-based carmaker expects to make bold moves in future mobility and to consolidate Hyundai’s position as “a pathfinder in the field of autonomous technology,” breaking from its previous position as a fast-follower, the company said in a statement.

The group’s three subsidiaries -- Hyundai Motor, Kia Motors and Hyundai Mobis -- will inject a combined $1.6 billion in cash and $400 million worth of engineering services, research and development capabilities and intellectual property rights.

Aptiv’s leadership in self-driving automation technologies -- certified by the Society of Automotive Engineers International as Level 4 and 5 -- will generate synergies when matched with Hyundai’s engineering and R&D capabilities, particularly considering the carmaker’s strength in hydrogen technology, Chung said.

A Level 4 vehicle can drive itself under limited conditions, while a Level 5 vehicle is fully autonomous and can operate under any conditions.

Noting that Level 4 and 5 self-driving vehicles consume significant amounts of power, he said Hyundai’s hydrogen-powered cars, which can go more than 600 kilometers on a single charge, would be a great match.

“(Electric) cars powered by (rechargeable) battery has limitation (in realizing such level of autonomous technology). Fuel-cell electric vehicles that can travel longer range is eligible for self-driving cars,” he said. “Self-driving cars will be interlinked to development of hydrogen-powered cars. Hydrogen vehicle is a good platform for autonomous cars.”

On Hyundai’s strategy of tapping into new markets after its apparent withdrawal from China, the 49-year-old businessman said Africa holds great potential as a market for car sales but also as market for sharing services.

Admitting that the company had excessive supply to China, Chung said he hopes to see balanced growth in the world’s largest auto market in near future. He also suggested Hyundai’s entry into Southeast Asia, adding that he sees business potential in the region, which has been dominated by Japanese carmakers.

Hyundai Motor is reportedly planning to build a new manufacturing factory in Indonesia with a $1 billion investment.

The plan is expected to be unveiled when Korea hosts Korea-ASEAN summit in Busan in November.

The company has been denying the reports, saying nothing has been confirmed yet.