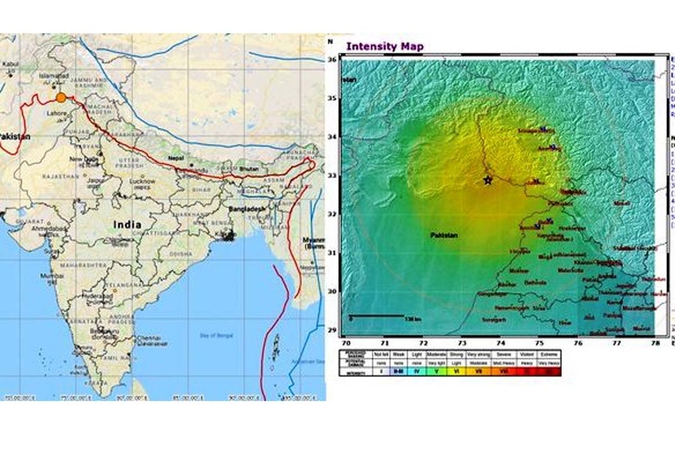 According to the IMD, the earthquake measured 6.3 on the Richter Scale and hit the Pakistan-India Jammu and Kashmir Border region at 4:31 pm.

The national capital was hit by a medium intensity earthquake on late Tuesday afternoon at around 4:30 pm forcing panic-stricken people to rush out of their homes, high rise apartments, and office buildings.

The tremors were felt across North India. According to reports, the epicentre of the earthquake is said to be somewhere in Pakistan-occupied-Kashmir (PoK). According to the IMD, the earthquake measured 6.3 on the Richter Scale and hit the Pakistan-India Jammu and Kashmir Border region at 4:31 pm.

JL Gautam, Director Operations, National Centre for Seismology said, “The epicentre of the earthquake was around Pakistan-India (J&K) border. It measured 6.3 on the Richter Scale. We felt it in Delhi too. Tremors were felt in Punjab, Rajasthan, Haryana, Jammu & Kashmir too.”

The tremors were felt in Delhi-NCR, Kashmir, Chandigarh, Uttar Pradesh, Uttarakhand and other parts of northern and Islamabad, Lahore, Rawalpindi, and Peshawar in Pakistan.

According to the European-Mediterranean Seismological Centre (EMSC), an earthquake of magnitude 6.1 at Richter scale struck 173 km North-West of Lahore, Pakistan.

As of now, there have been no reports of any loss to life or property.