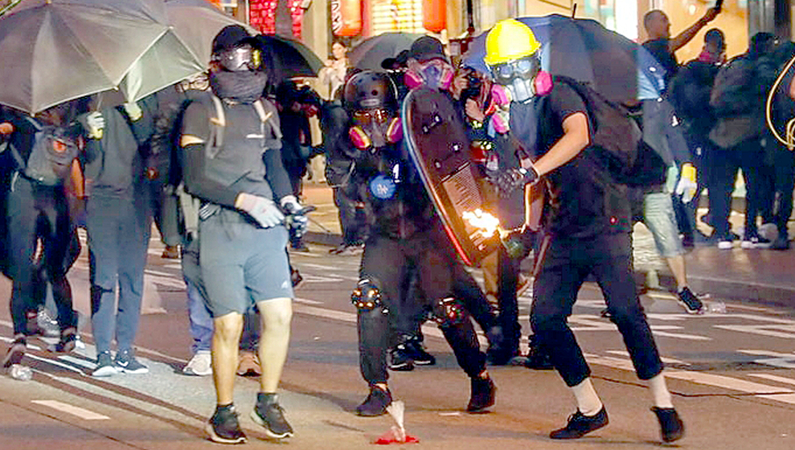 A rioter throws a gasoline bomb at police in Wan Chai. [PHOTO/CHINA DAILY]

Hong Kong has banned the wearing of facial masks in public with violators facing imprisonment of up to one year and a fine of HK$25,000, according to Secretary for Security John Lee Ka-Chiu.

Anyone who wears a facial covering to hide their identity during a public meeting, public procession or illegal assembly will be held accountable for violating the ban, according to the new law.

Wearing a mask for medical and religious reasons will be exempted, Lee said.

The anti-mask law also empowers police officers to stop a person wearing a mask in a public place and require the removal of the facial covering; non-compliance is an offence subject to a maximum jail term of six months and a fine of HK$10,000.

In announcing the legislation, Hong Kong Special Administrative Region Chief Executive Carrie Lam Cheng Yuet-ngor said the decision to adopt a ban is a hard but a necessary one in public interest.

Lam said protester violence has been escalating and has reached a very alarming level in the past few days, causing numerous injuries and leading Hong Kong into a chaotic and panic situation.

"We are particularly concerned that many students are participating in these violent protests, or even riots, jeopardising their safety and even their future," she added.

As a responsible government, Lam said it is a duty to use all available means to stop the escalating violence and restore calmness in society.

"We believe the new law will create a deterrent effect against masked violent protesters and rioters and will assist the police in law enforcement," Lam said.