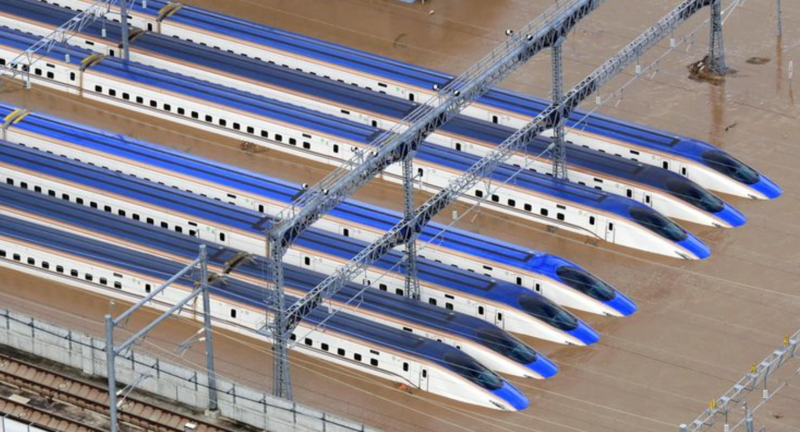 The Yomiuri Shimbun Shinkansen trains are seen flooded due to heavy rains by Typhoon No. 19 in Nagano, on Sunday.

East Japan Railway Co. (JR East) said Sunday that its Shinkansen train depot in Nagano was flooded after a dike of the Chikuma River burst in the Hoyasu district in Nagano.

The company said it has heard that train cars of the Hokuriku Shinkansen line were inundated by flood waters in the aftermath of powerful Typhoon No. 19.

As an evacuation order has been issued in the district, JR East officials were unable to approach the train depot center. Thus, there is no way to specifically assess the situation.

Services on the Hokuriku Shinkansen line were scheduled to resume around noon Sunday, but JR East said it is unknown now when that will take effect.

According to a Yomiuri Shimbun tally, as of 1 p.m. on Sunday, Typhoon No. 19 had claimed the lives of 16 people in Tochigi, Gunma, Kanagawa, Iwate, Miyagi, Fukushima, Saitama and Chiba prefectures, with 20 people missing.