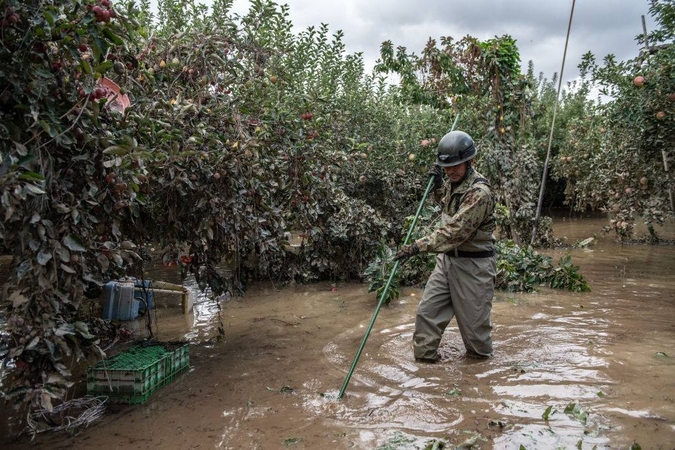 A soldier from Japan's Self Defence Force searches an apple orchard for bodies after heavy flooding caused by Typhoon Hagibis, on Tuesday in Hoyasu near Nagano, Japan. Japan has mobilised over 100,000 rescue workers after the typhoon, the most powerful in decades, swept across the country killing at least 75 people and leaving thousands injured and homeless. Photo: Getty Images

Rescue workers are now working around the clock in search of survivors as the death toll continues to mount from Typhoon Hagibis, which pounded wide areas of Japan with record-breaking rainfall on Saturday.

As of Tuesday night, there were at least 75 dead across 12 prefectures, while at least 16 were missing and 228 were injured.

Japan is still scrambling to get a full picture of the scale of the devastation wrought by the typhoon, with Prime Minister Shinzo Abe vowing to draw on an emergency fund and to work assiduously to support survivors, given that winter is coming.

“There are many concerns over the long-term impact on living standards and the economy,” he told an emergency disaster meeting, as he vowed to anticipate the needs of survivors so as to quickly improve conditions at shelters and to secure housing for the displaced.

Japanese Emperor Naruhito and Empress Masako are “deeply disturbed by the loss of so many lives and the scale of damage”, the Imperial Household Agency said in a statement yesterday.

Emperor Emeritus Akihito and Empress Emerita Michiko are also paying close attention to the developments, with celebratory events for the latter’s 85th birthday on Sunday to be cancelled.

Defence Minister Taro Kono said yesterday that he will mobilise 200 reserve members of the Self-Defence Forces for emergency relief efforts, and may yet raise this number to 1,000 personnel. This is the first time the reserve force has been activated since the March 11, 2011, earthquake and tsunami.

But amid the recovery efforts is a brewing controversy, as two homeless men were shut out of evacuation centres in Tokyo's Taito ward at the peak of the storm. The ward oversees such popular tourist attractions as the Sensoji Temple in Asakusa and Ueno Park.

The ward office’s rationale for turning them away was that the two homeless men, one of whom is a 64-year-old with a speech impediment due to a stroke, “did not have registered addresses”.

The move has split public opinion, with many lambasting it as heartless. But others argue that the homeless are “not taxpayers and should not inconvenience others seeking refuge with their odours”.

Abe, asked about the government's position in Parliament yesterday, stressed that there should be no discrimination in times of natural disaster.

At least one of the 75 confirmed dead is suspected to have been homeless. The man, in his 70s, was found beside the riverbed of the Tama River in Tokyo, entangled in debris such as fallen tree branches. The river had overflowed in the storm.

About one-third of those who died were from Fukushima, where the dykes of the Abukuma River collapsed, causing a sudden surge in flood waters in low-lying areas.

Many people were washed away as they tried to flee in their cars, or were on the first storey of their homes.

In Nagano, where the embankment of Japan’s longest river Chikuma was breached, hundreds of people had been stranded. Widespread flooding also occurred in Kanagawa and Miyagi prefectures, which accounted for 14 deaths each.

Typhoon Hagibis caused mudslides in 146 places, while at least 13,000 homes were damaged by flooding.