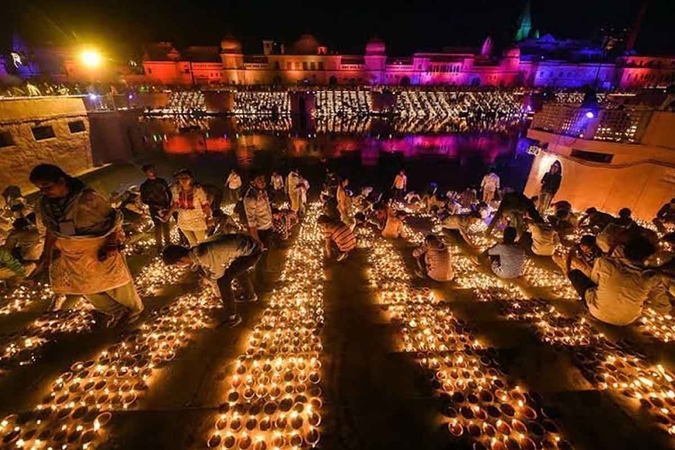 Assistant Minister and Deputy Speaker of the parliament of the Republic of Fiji Veena Kumar Bhatnagar was the chief guest. (Image: Twitter@BJP4Karnataka)

The temple town of Ayodhya in the state of Uttar Pradesh on Saturday stamped its name in the book of the world records as over 5 lakh 51 thousand earthen lamps or diyas were lit on the banks of the river Saryu and other places as part of the Grand Diwali celebrations at Ayodhya, say the reports.

In fact, this is the third consecutive year that Deepotsav has been celebrated on such a massive scale in Ayodhya, fondly also called Ramnagari. The Uttar Pradesh government has given Ayodhya Deepotsav the status of a State Fair and the whole management and expenses are borne by the state government.

Last year, more than 3 lakh earthen lamps were lit on the banks of Saryu river. Prominent among those present on the occasion were State Governor Anandiben Patel, various Ministers of Central and State Government and other dignitaries. Assistant Minister and Deputy Speaker of the parliament of the Republic of Fiji Veena  Kumar Bhatnagar was the chief guest.

Speaking on the occasion Chief Minister Yogi Adityanath said that India, under the leadership of Prime Minister Narendra Modi, has taken Indian culture and values to the entire world. He said that his government is establishing “Ramrajya” where the government’s welfare schemes are being implemented among the people without any discrimination on the basis of caste, creed and religion.

Veena Kumar Bhatnagar said that the relations between India and Fiji are very strong and deep-rooted.