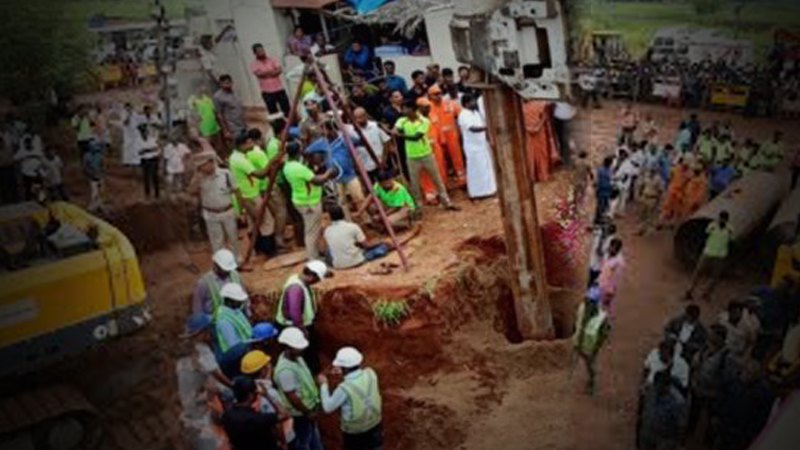 The two-year-old boy, Sujith Wilson, who was stuck in a borewell in Tamil Nadu’s Tiruchirappalli district since October 25, has died. His body was taken out early Tuesday after over 80 hours of rescue efforts.

Sujith’s body was taken straight to the cemetery for a funeral after doctors at the Manaparai Government Hospital conducted an autopsy.

The rescue operation had got delayed because of the rocky terrain. However, the teams continued their efforts to save the toddler.

J Radhakrishnan, Principal Secretary, Revenue Administration, Disaster Management and Mitigation department had on Monday said that it might take another 12 hours to rescue the child.

However, in the wee hours of Tuesday, Radhakrishnan told reporters that the toddler’s body was now in a decomposed state as foul smell had started emanating from the borewell.

“The two-year-old boy’s body is now in a decomposed state. We tried our best to rescue him but unfortunately foul smell has started coming from the borewell in which the child had fallen. As of now, digging process has been stopped,” he said.

Till then, a pit had been dug up to 65 feet near the borewell.Earlier on Monday, Prime Minister Narendra Modi had hoped for the speedy rescue of the boy and said that he has spoken to Tamil Nadu Chief Minister Edappadi K Palaniswami regarding the rescue efforts underway to save Sujith.

Initially, earthmoving equipment was pressed into service to dig a pit near the borewell to reach the boy. But, it was stopped midway as the terrain was rocky. Besides, it was felt that this process could cause vibrations that may loosen the soil inside the borewell, thereby slipping the boy further down.

Later, the rescue team used a special equipment ‘borewell robot’. But that too was not successful.

Several teams with their own technologies tried to rescue the boy, but all of that failed.