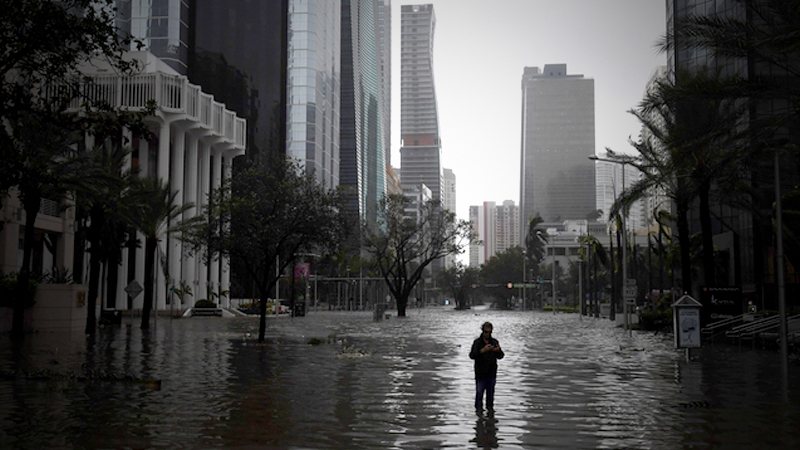 A man stands in a flooded street as Hurricane Irma hits the area on September 10, 2017 in Miami, Florida. Photo: Washington Post/Matt McClain

Rising seas will be much worse and more expensive to deal with than previously supposed, new research finds, not because of faster changes in sea levels but because of a boost in estimates of the number of people already living on low ground.

The upshot of the study is that 110 million people around the globe live below the current high tide level, including many partially protected by existing sea walls or other infrastructure, as in New Orleans. Even under a scenario of very modest climate change, that number will rise to 150 million in 2050 and 190 million by 2100.

If climate change and sea level rise follow a worse path, as many as 340 million people living below the high tide level could be in peril, to say nothing of how many could be affected in floods and extreme events.

Such figures are three times, or more, higher than earlier estimates.

“We’ve had a huge blind spot as to the degree of danger, and that’s what we’ve been striving to improve,” said Benjamin Strauss of Climate Central, who authored the new study in Nature Communications with colleague Scott Kulp.

The reason for the big change is that prior research has relied on data about coastal elevations that comes from radar measurements from the 2000 space shuttle Endeavor mission. But that data set has problems. The instrument detected the height not only of the coastal land surface but anything else that was on it, such as houses or trees. This introduced error into land elevation estimates averaging about six and a half feet globally, the new study says.

“For all of the resources we have rightly invested in improving our sea level projections, we didn’t know the height of the ground beneath our feet,” Strauss said.

Some wealthy countries, such as the United States, have used laser-based coastal measurements to gain more accuracy, but most have not been able to do so.

The new study uses the more accurate US measurements as a guide, training an algorithm to apply similar adjustments to the global data set from the space shuttle. This is where the much higher numbers for exposed populations come from, with the biggest changes in exposure coming for countries in Asia.

“In terms of global estimates, I think the analysis convincingly shows that the situation is probably even worse than previous studies suggested,” said Stephane Hallegatte, an economist at the World Bank who studies climate change and disaster exposure. “We are talking about hundreds of millions of people who will be directly exposed.”

The changes are certainly very large. The study estimates that 110 million people live below the current high tide level, vs an estimated 28 million for the older data set. About 250 million people would fall below the level of the worst yearly flood, the study says, up from the previous estimate of 65 million.

Projections illustrate how exposed people will be as seas continue to rise.

The study considers a scenario that would lead to 2 degree Celsius, or 3.6 degrees Fahrenheit, of global warming by 2100, the temperature rise that world leaders have set as an absolute limit. The study projects that 150 million would live below the high tide line by 2050 and 200 million by 2100. Those exposed to an annual flood in that year would be 360 million.

The world is on course to warm considerably more than 2 degrees Celsius, however, so there are more dire scenarios.

If key instabilities kick in in Antarctica, 480 million people would be exposed to an annual flood in 2100.

The findings are worst for Asia, notably in China, Bangladesh and India. In the worst-case scenario, these countries would see 87 million, 50 million and 38 million people below the high tide level, respectively, in 2100.

The situation is, if anything, more ominous than these figures suggest, according to the World Bank’s Hallegatte. That’s because in addition to high tide and annual worst-case flood events, there are major floods from hurricanes and other storms and disasters to take into consideration, even if they do not occur every year. The impact of these severe events will be worsened and affect larger populations as seas continue to rise.

“Most dykes and protection systems have been built for the sea level of 50 years ago or more, and will be increasingly ill-designed to protect people against floods, leading to rapidly increasing coastal flood losses in the absence of large upgrades,” Hallegatte said. “Upgrading those systems will be expensive, but is unavoidable if one wants to avoid unacceptable economic losses in large cities.”

Several other researchers said the new estimates are a step forward, though some criticised the work.

“This study is an important step towards a more accurate estimation of population at risk from global sea level rise,” said Pinki Mondal, a University of Delaware researcher who uses satellite and other remote-sensing tools to study climate change risks and impacts. “With advancements in technology, computing resources and machine learning, it is becoming increasingly possible to have highly accurate estimates of say, elevation, as shown in this study.”

Athanasios Vafeidis, a sea-level expert at the University of Kiel in Germany, agreed that the research presents “new, improved information on coastal elevation”.

“However,” he said, “important factors such as socioeconomic development and adaptation are not considered in these estimates. Physical processes are represented in a rather simplistic manner.”

Vafeidis noted that it is not clear that the algorithm, trained on the US coastline, performs equally well in other countries. He also said that the way populations grow and adapt to rising seas are more complex than the study was able to account for and that the impacts of floods, too, depend on much more nuanced factors than the sheer elevation of the land.

Climate Central’s Strauss acknowledges that the study does not give any “explicit consideration” to current adaptation measures, like sea walls, in assessing present day exposure; it is merely measuring the elevation of the land itself and the number of people living upon it.

That might actually be good news, Strauss argues, an indication that humans are already capable of adapting to threats from the sea.

“We infer that there must be coastal defences protecting those 100 million plus people below today's high tide line,” said Strauss. “Because only a handful of them can be living in houseboats or homes on stilts.”

Still, whatever their current defences, people already living below high tide lines are likely to be increasingly tested in coming years.

“This new study suggests that a lot of the assessments published on climate change risks are underestimated and would need to be revised,” Hallegatte said.