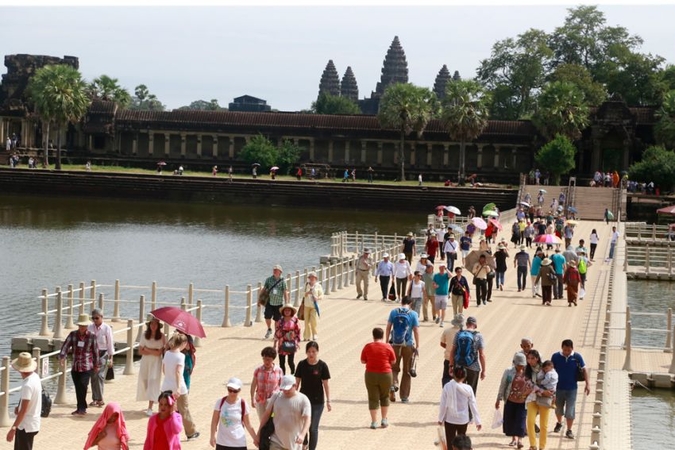 Chinese tourists accounted for 38.7 per cent of foreign tourists visiting Cambodia in the first nine months of 2019. Photo: The Phnom Penh Post/ANN

The number of Thai visitors to Cambodia recorded a 22.4 per cent increase year on year in the first nine months while Chinese tourists again topped the list of foreign visitors to the country.

Cambodia received 4.81 million international tourists in the first nine months, a 10 per cent increase over last year. A total of 1.86 million Chinese, up 30 per cent over the same period last year, accounted for 38.7 per cent of all foreign tourists, according to the monthly report of Cambodia’s Ministry of Tourism.

Vietnamese tourists ranked second, with a total of 63,700 visitors, up 9.1 per cent.

Ministry of Tourism spokesman Top Sopheak told The Phnom Penh Post that the large number of Chinese tourists travelling to Cambodia was a key contributor to the industry’s growth, though tourist-friendly Siem Reap experienced a slight dip in the number of foreign visitors.

“The growth is consistent with the ministry’s forecast of 6.6 million international tourists this year,” he said, noting that the number of visitors from other Asian countries such as South Korea and Laos had fallen in the period.

Around 3.39 million tourists arrived in Cambodia by air, up 14.7 per cent on last year, with two of the Kingdom’s three international airports recording increases in arrivals.

However, arrivals at Siem Reap International Airport dropped by 10.9 per cent when compared to the same period last year.

Cambodia Association of Travel Agents (Cata) president Chhay Sivlin told The Phnom Penh Post that while the growth in the number of Chinese tourists was encouraging, he was concerned about the drop in visitors from other countries.

“The growth in the number of Chinese tourists is positive, but the decline in other foreign tourists such as from Korea and the US is not good news,” she said.

Last year, Cambodia recorded a total of 6.2 million visitors travelling to Cambodia from abroad, up 10.7 per cent from 2017 – with Chinese nationals making up 2.02 million.