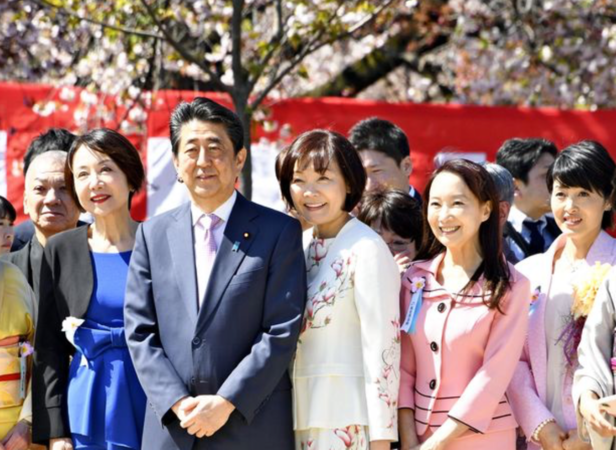 TOKYO (Jiji Press) — With only about three weeks left before the end of the current extraordinary session of the Diet, a scandal over a cherry blossom-viewing party hosted by Prime Minister Shinzo Abe is expected to become a major issue in the political world.

Opposition parties are demanding that intensive debates over the issue be held at a budget committee meeting participated in by the prime minister, but the ruling coalition, led by Abe’s Liberal Democratic Party, has no plan to accept the demand.

The opposition side at the same time is increasingly cautious about the scenario of Abe dissolving for a snap election the House of Representatives, the all-important lower chamber of the Diet, at next year’s ordinary parliamentary session, which is slated to be convened in January, in an attempt to divert public attention from the matter.

The opposition camp is accusing Abe of using taxpayer money for his own interest, claiming that guests to the state-funded party included many of his supporters. Abe is also under fire because his personal office allegedly covered part of the costs for a dinner for his supporters held on the eve of the cherry blossom party, a practice that could be in violation of the Public Offices Election Law. In addition, the list of guests to the cherry blossom party was discarded.

Speaking to reporters on Friday, Abe tried to defend himself over the scandal, saying, among other things, that the costs for the dinner were fully borne by the guests and that there was no legal violation.

But the opposition camp rejected the claims. “This is a big issue. Discarding the list of guests is a violation of the rules,” Yuichiro Tamaki, head of the opposition Democratic Party for the People, said in a street speech in the city of Tosa, Kochi Prefecture on Saturday.

“Opposition parties should discuss immediately how to cooperate in dealing with the scandal,” Jun Azumi, Diet affairs chief of the major opposition Constitutional Democratic Party of Japan, told reporters on Friday.

At a plenary meeting on Wednesday, the House of Councillors, is slated to start deliberations on a bill to ratify a recently signed Japan-U.S. trade agreement, with Abe seen attending the gathering. The opposition bloc is expected to question the prime minister about the scandal at the meeting.

The Cabinet Committee of the Lower House is also scheduled to meet on the same day.

By upgrading their joint investigation team to a “headquarters,” opposition parties plan to strengthen their probe of the problem and grill the Abe government for the rest of the ongoing extraordinary Diet session, which is set to end on Dec. 9.

But the ruling bloc keeps rejecting the opposition demand for Abe to speak about the scandal at the Diet. A senior LDP lawmaker in the upper house also sounded negative about holding intensive debates at a budget committee meeting, saying, “There is no time for such debates.”

Some ruling coalition lawmakers are seeking to extend the Diet session to pass bills, including one to amend the national referendum law for improving voter convenience in a possible referendum on revising the Constitution.

With opposition parties certain to press the ruling side harder to agree to hold intensive discussions, however, an LDP executive said, “We are not considering an extension of the Diet session.”

A senior CDPJ official said that the party is ready to continue shedding light on the cherry blossom party and dinner scandal at the upcoming regular Diet session.

But another senior official of the party said that Abe may dissolve the lower house at the early stage of the ordinary Diet session for a snap general election.

Abe dissolved the lower house in September 2017, at a time when he was facing favoritism scandals involving school operators Moritomo Gakuen and Kake Educational Institution.