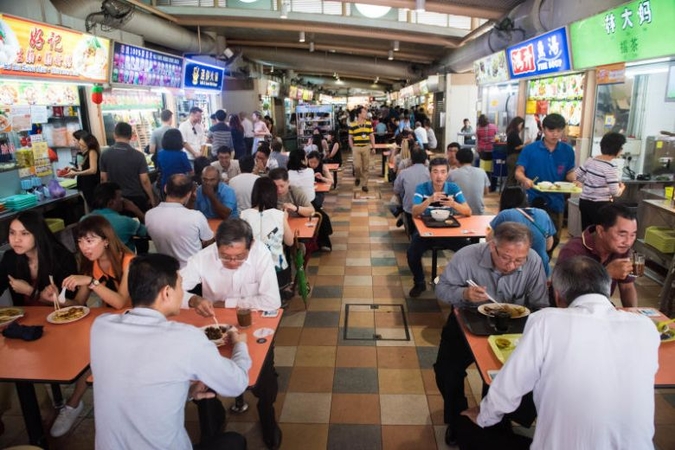 As of 2018, one in two stalls in hawker centres and coffee shops have at least one healthier option on their menu, as part of the Healthier Dining Programme.PHOTO: ST FILE

SINGAPORE - From measures to prevent diabetes such as giving Singaporeans healthier food options, to helping patients manage the condition before it worsens - the authorities have been amping up efforts since 2016, when the war on diabetes was launched.

From 2016 to 2018, the proportion of Healthier Choice Symbol products in the market, across 100 food categories, increased by 7.4 percentage points, the Ministry of Health (MOH) said on Sunday (Nov 17) in an update on its efforts.

As of 2018, one in two stalls in hawker centres and coffee shops have at least one healthier option on their menu, as part of the Healthier Dining Programme.

People with diabetes are also getting greater support to help them manage their condition.

For instance, a beta set of reference materials for newly diagnosed patients to help them make changes to their lifestyle is available on HealthHub, an e-services portal and mobile app where Singaporeans can access their health records and other resources. A full set of materials will be available by the end of this year.

Programmes to address common complications associated with diabetes, such as eye problems, kidney failure and limb amputations, have also been rolled out.

They include the Singapore Integrated Diabetic Retinopathy Programme, which started in 2012. It is a centralised screening programme at all polyclinics to detect eye complications in patients with diabetes. The annual number of eye screenings performed as part of this programme has increased from about 14,000 in 2012 to 92,000 last year.

Senior Minister of State for Law and Health Edwin Tong shared a summary report of the efforts made in the war on diabetes launched in 2016.

Speaking at an event on Sunday to commemorate World Diabetes Day, Mr Tong said: "Diabetes is a serious health concern globally and in Singapore." One in three Singaporeans is at risk of developing diabetes in their lifetime, he added.

In the area of patient empowerment, Mr Tong cited a pilot programme by the National University Health System (NUHS) to motivate individuals to take control of their condition and make their own lifestyle changes.

But on top of that, healthcare professionals and volunteers "need access to more training and resources to improve their delivery of care", he said.

To strengthen community support, Mr Tong noted that there are initiatives to better equip volunteers, such as through the Health Peers Programme by Changi General Hospital and NUHS, where layperson volunteers called Health Peers are trained by professionals to deal with people with diabetes.

The third area in the fight against diabetes is to create an environment that helps people to initiate and sustain positive lifestyle changes, such as ramping up healthier choice options, Mr Tong said.

He added: "While the government, the healthcare family and the community will continue to provide support and nudge Singaporeans towards healthier habits, one's health is ultimately a personal responsibility and it requires the individual to initiate and sustain positive behaviours."

According to the latest available National Population Health Survey, 8.6 per cent of Singapore residents had diabetes in 2017. MOH has said the latest statistics are not ready to be published.

The event on Sunday was organised by Diabetes Singapore and NUHS to raise public awareness of diabetes. There were public health screenings as well as a symposium for general practitioners.