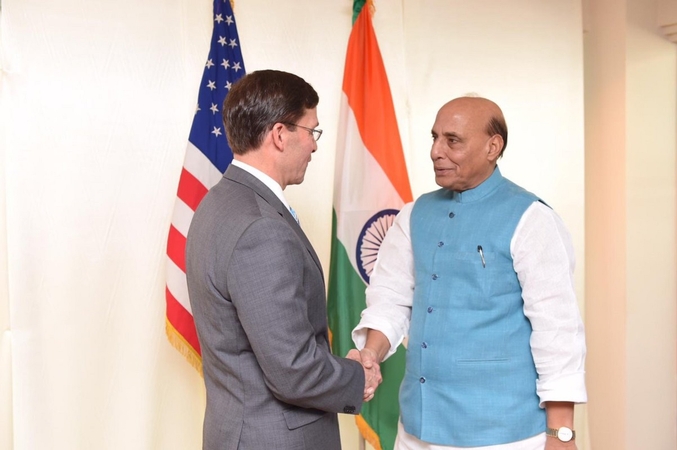 Defence Minister Rajnath Singh held talks with US Defence Secretary Mark T Esper in Bangkok on Sunday on issues of strategic importance. The discussion was on situation in the Indo-Pacific region and ways to further bolster bilateral security cooperation.

The meeting  was held on the the sidelines of the ASEAN Defence Ministers’ Meeting-Plus (ADMM-Plus), It is a platform comprising ASEAN and its eight dialogue partners including India, officials said here.

In the meeting with US defence secretary Esper, Singh reaffirmed New Delhi’s vision for a free, open and inclusive Indo-Pacific region based on a rules-based order and respect for sovereignty and territorial integrity.

China has been fast expanding military and economic influence in the Indo-Pacific region, triggering concern in various countries of the region and beyond.

Singh said there has been a growing convergence between India and the US on the Indo-Pacific, adding the 10-member grouping of Association of Southeast Asian Nations (ASEAN) is central to New Delhi’s vision for the region.

“Had an excellent meeting with US Secretary of Defence, Dr. Mark T Esper in Bangkok today. We talked about ways to expand defence cooperation between India and the United States,” he tweeted. Singh conveyed to his American counterpart that he was looking forward to have substantial discussions during the deliberations under the ‘two-plus-two’ foreign and defence ministerial dialogue between the two countries in Washington later next month, the defence ministry said in a statement.

Singh  expressed happiness on the growing Indo-US ties. He said the cooperation between the two sides has grown across a wide range of sectors, including defence and security, economy, energy, counter-terrorism and people-to-people relationship.

The ADMM-Plus is also likely to review the evolving security scenario in the region, particularly in the maritime domain.

The inaugural ADMM-Plus was convened in Hanoi in 2010.  Five areas of practical cooperation to pursue under the new mechanism, including maritime security, counter-terrorism, humanitarian assistance and peacekeeping operations  were agreed on by the  then Defence Ministers.

The Defence Minister also held a separate meeting with his Japanese counterpart Taro Kono with a focus on adding further momentum to bilateral defence cooperation.