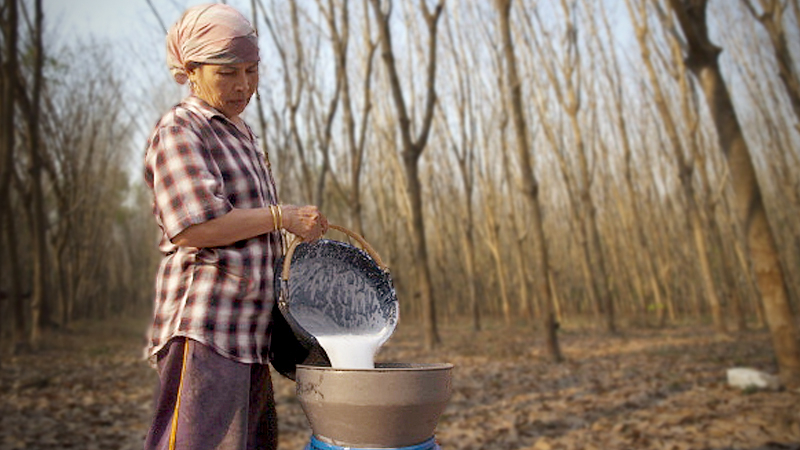 A Thai farmer pours rubber sap collected from trees on her and her husband's rubber plantation in Rayong, Thailand. Photo: Getty Images

In March, the International Tripartite Rubber Council (ITRC), which comprises Thailand, Indonesia and Malaysia, agreed to reduce rubber exports by about 240,000 tonnes from late May to late September to buoy local prices, Reuters reported last week.

The three Southeast Asian neighbours, who produce 70 per cent of the world’s natural rubber, ended up slashing exports by 441,648 tonnes during the period.

“Thailand negotiated the sale of 260,480 tonnes of rubber to two private companies in China and Hong Kong,” he said. “This agreement should be worth not less than Bt13 billion [US$429 million].”

Sopheak, who is the owner and director of Sopheak Nika Investment Agro-Industrial Plants Co Ltd, a leading rubber grower and exporter that employs nearly 5,000 workers, said Thailand and the ITRC’s moves will affect Cambodia’s rubber value and production as the Kingdom has limited ability to compete with its neighbours.

“We are concerned that when all the major countries increase their sales of rubber products, it will bring down the price of our rubber, as the cost of production in Cambodia is higher than in Thailand, Malaysia and Indonesia.

“If we look at recent global demand and supply of rubber, we see that the supply of natural rubber is increasing while demand has decreased from 1.5 million tonnes to less than one million tonnes on the global market,” he said.

The average price of rubber is currently about $1,400 per tonne at Saigon Port in Ho Chi Minh City, Vietnam, he said, adding that as of last month, his company exported more than 10,000 tonnes of rubber this year – up 15 per cent from the same period last year.

“I call on the government to encourage rubber growers and producers by easing export taxes,” he said.

Department of International Marketing and Cooperation deputy director Horn Saphan told The Phnom Post on Sunday that Thailand will boost its rubber exports to react to an oversupply of global market demand.

However, he said global rubber prices would remain unchanged over the next few years.

“Our rubber production for export is minimal compared to the big three countries [of the ITRC], and now we rely on exports due to a lack of a local market, as [the Kingdom] does not use rubber in the industrial sector [such as] car tyre production,” he said.

Khoun Phalla, the director of Cambodia’s General Directorate of Rubber’s Administration and Legal Department, said Cambodian rubber exports in the first nine months of this year reached 173,072 tonnes worth $231 million, up almost 22 per cent year on year from about $190 million.

The directorate’s rubber data shows that it was grown on more than 230,000 hectares during the first nine months of this year, with total rubber plantations in the Kingdom measuring 434,552 hectares.

A Cambodian Ministry of Agriculture, Forestry and Fisheries report showed that Cambodia exported 210,000 tonnes of rubber last year, worth about $300 million.