Followers prepare to move the statue of Mazu out of the Meizhou Mazu Ancestral Temple.[Photo/Xinhua]

Statue of China's famous sea goddess from Fujian is warmly welcomed in Bangkok by enthusiastic followers.

BANGKOK-On Sunday morning, Lin Guiying, a Thai Chinese, got up at 6 am, put on a red shirt, and jumped onto a vehicle headed for Bangkok more than 90 kilometers away.

"Since I was a child, my mom told me many stories about Mazu," the enthusiastic traveler said.

Lin later joined thousands of people dressed in red on the streets of the Thai capital. They beat drums and gongs and performed lion dances to welcome and pay tribute to a special visitor-Mazu, China's most influential sea goddess.

Amid camera flashes and the gaze of onlookers, a Boeing 787 Dreamliner departed from the coastal city of Xiamen, Fujian province, on Thursday morning. Aboard the flight was a unique passenger-a statue of the goddess Mazu, which was on its first trip to Thailand at the invitation of local worshippers.

The human-sized wooden statue, dressed in an embroidered robe and a crown decorated with jewels, is a revered icon from the ancestral temple of Mazu located on Meizhou Island, Putian.

The Meizhou Mazu version is the most worshipped statue among Mazu's followers.

During her stay in Thailand from Thursday to Tuesday, the Mazu statue was paraded for a number of cultural exchange activities involving local communities. "More and more people in Thailand are getting interested in the Mazu culture, and through Mazu they are gaining a deeper understanding about the Chinese culture," said Wu Hongyan, vicechairman of Thailand Quanzhou Jinjiang Union, who escorted the Mazu statue to Bangkok.

Noting that Mazu enjoys widespread popularity in Thailand, Arrun Boonchai, assistant permanent secretary at Thailand's Ministry of Tourism and Sports, said at the welcoming ceremony he appreciated that he and his compatriots could see Mazu in person.

Arrun added that he hoped such activities would increase cultural exchanges between Thailand and China.

Ferried across the sea, carried by bus and flown economy class-the journey of the revered goddess' statue to Thailand was a reminder to many people that Mazu was once an ordinary human.

Mazu was a young woman named Lin Mo who is believed to have lived during the 10th century on Meizhou Island, where she dedicated herself to helping people in need. She died at the age of 27 attempting to rescue shipwreck victims.

She was deified, and locals regarded her as the goddess of the sea who could bring peace, wealth and good luck. Before heading to the sea, sailors and fishermen would venerate her statue and pray for her protection, in the hope they would return home safely and with a big catch.

Stories about Mazu bringing safety, harmony and prosperity were told among her followers for more than 1,000 years.

"Mazu is a goddess, and is also a human," said Zhou Jinyan, deputy secretary-general of the Chinese Mazu Cultural Exchange Association. "We accept Mazu as a member of our family."

To her followers, Mazu is an inspiration to many to overcome hardships during sea voyages, and she represents the spirit of integrity, benevolence and love, Zhou said. 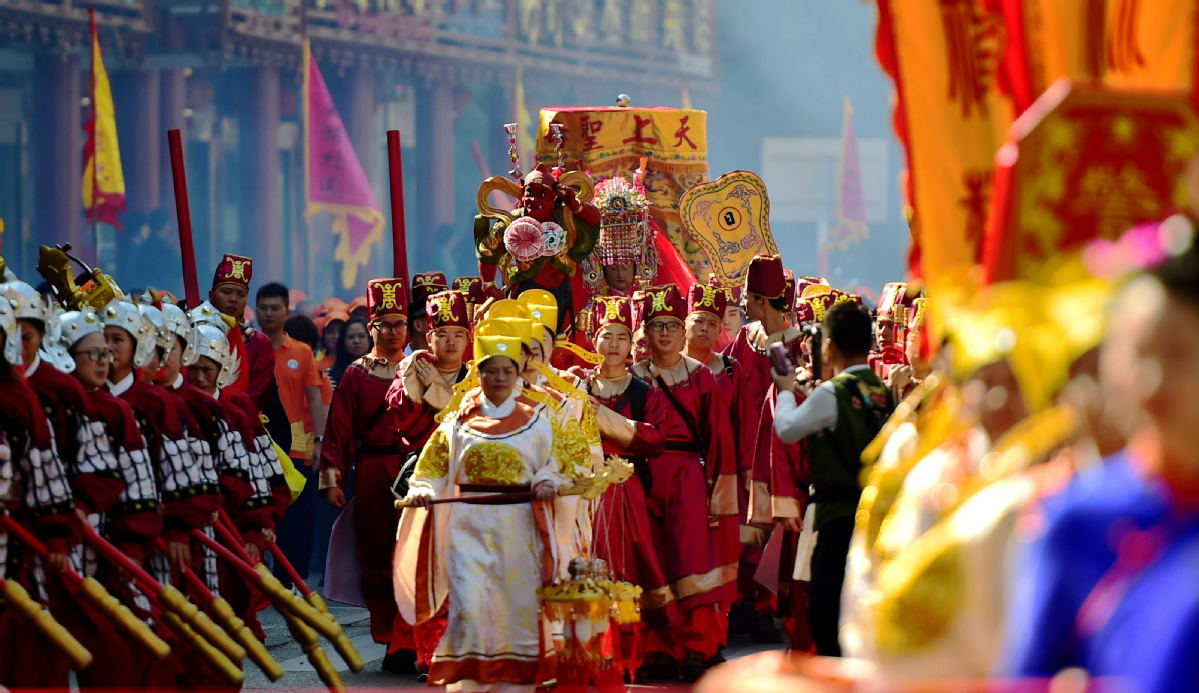 As trade flourished in ports along the ancient Maritime Silk Road, more and more Chinese people ventured out to the sea, taking silk, china, tea, and their belief in Mazu to lands beyond their own shores. Mazu is now estimated to have more than 300 million followers in 46 countries and regions around the world. In 2009, Mazu belief and customs were placed on the UNESCO Representative List of the Intangible Cultural Heritage of Humanity.

To further spread Mazu's spirit, since 2017 the Meizhou Mazu Ancestral Temple has initiated a cultural exchange campaign by arranging foreign visits for the Mazu statue to countries along the Maritime Silk Road.

"Mazu's followers include people of different colors and with different religious backgrounds," Zhou said, adding that the goddess "gained their faith for her inclusiveness and advocating peace".

Mazu visited Singapore and Malaysia in 2017, and the Philippines last year.