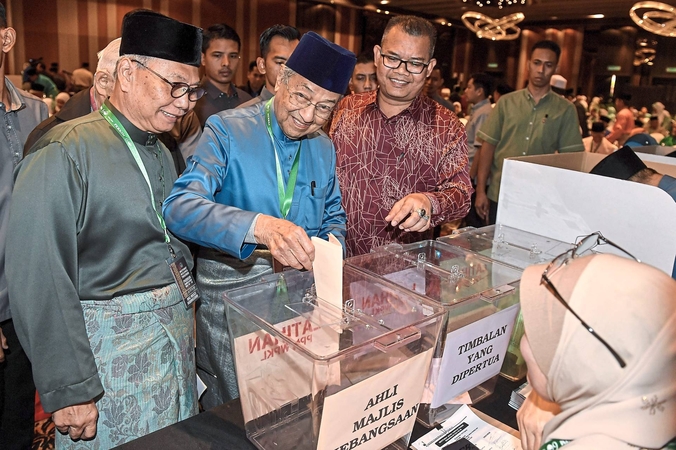 KUALA LUMPUR: A weak ringgit is one of the reasons behind the high cost of living, says Tun Dr Mahathir Mohamad.

The Prime Minister said previously the ringgit was about RM3.80 to one US dollar.

“Now it is about RM4.20 to one US dollar and now everything that we want to buy has become expensive,” he said after opening the Muslim Welfare Organisation of Malaysia (Perkim) 58th annual general meeting here yesterday.

Dr Mahathir was asked to comment on the findings of the National Worry Index survey that saw bread-and-butter issues topping the list with 86% worried about the cost of basic needs and unaffordable homes, followed by the lack of job opportunities at 77%.

The index – released by think-tank Emir Research – also showed that respondents were generally unsure if the country’s future was on the right track.

To this, Dr Mahathir said those who were not confident with the way the government was implementing its promises could determine Pakatan Harapan’s fate in the 15th General Election.

“If they are unsure, they can vote during the 15th General Election.

“They can vote to determine Pakatan’s fate,” he said, adding that it would take a full five-year term for the government to implement all of its election promises.

Dr Mahathir said Pakatan did not get the full picture when it was drafting its election manifesto.

“When we took over, we found more problems left by the previous government that are more damaging than we had expected. This is why it will take some time to achieve our goals,” he said.

On a separate matter, the Prime Minister said the government was still studying amendments to

“We do not simply want to release terrorists who will make bombs and detonate them here and there.

“We cannot give these individuals bail,” he said.

Dr Mahathir added that those who were charged with sabotaging the economy despite there being no concrete support could be given bail and should not be detained for too long.

“At the moment, we want to reduce the detention period of 28 days,” he said.

On Nov 6, Home Minister Tan Sri Muhyiddin Yassin said the government planned to reduce the remand period to 14 days for those detained under the Act.