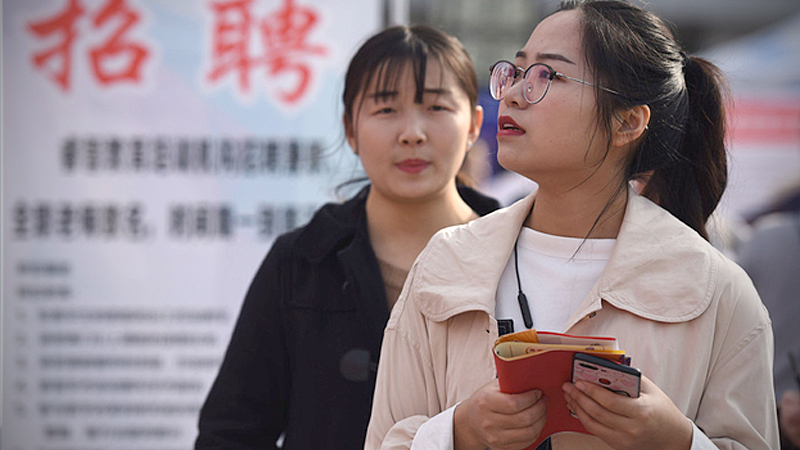 BEIJING - Despite external uncertainties and concerns of a softening economy, China has kept delivering impressive job gains with a resilient economy and nimble governance.

According to the National Bureau of Statistics (NBS), 11.93 million new urban jobs were created in the first 10 months this year, meeting the annual target of creating more than 11 million new jobs ahead of schedule.

Before 2019, China has created more than 13 million new urban jobs annually for six consecutive years even though its GDP growth slowed.

The country's economy expanded 6.2 percent in the first three quarters, within the government's annual target of 6 to 6.5 percent.

Every percentage point increase of the country's GDP growth can be translated into around 2 million new jobs, said Liu Aihua, spokesperson of the NBS.

Buoyed by the steady economic growth, China's job market is getting stronger support from the tertiary industry.

In recent years, China's economic structure has shifted from an industry-led one to a service-led one. The output of the tertiary industry in 2018 reached 46.96 trillion yuan ($6.66 trillion), up 7.6 percent year by year, accounting for 52.2 percent of the total GDP.

The tertiary industry's contribution to job creation is about 20 percentage points higher on average than the second industry in 2018, according to the Ministry of Human Resources and Social Security.

Moreover, new business models are also creating jobs. About 75 million people are providing services for the sharing economy in 2018, up by 7.1 percent from the previous year and accounting for 9.7 percent of the people who were employed in the country, according to the State Information Center.

Three Squirrels, a snack food company, is transforming from an e-commerce brand on Alibaba's Taobao to a digital supply chain platform. The company has developed into a company with over 3,800 employees in seven years from a five-person founding team.

"The recruitment of talent can also further strengthen our innovative capability," said Yin Xiang, an official with the company.

"The stable labor market is not only a result of the expanding economy but also benefits from an improved implementation of the employment-related policies," said Zhang Ying, an official with the Ministry of Human Resources and Social Security.

China has elevated the status of employment-first policy to a macro policy for the first time this year. China's policymakers not only attached great importance to employment, but also tailored the policies to boost employment.

Starting from May 1, the government lowered the share borne by employers for urban workers' basic aged-care insurance down to 16 percent from 20 percent, saving employers 272.5 billion yuan in social insurance contributions in the first nine months of this year, according to the State Taxation Administration.

As small and medium-sized enterprises have contributed more than 80 percent of the job opportunities in China in 2018, reducing the burden for them can further unleash the vitality of the labor market.

Meanwhile, about 27.5 billion yuan of partial reimbursement of unemployment insurance contributions were returned to employers who keep their payrolls, benefiting 750,000 firms and 39.93 million employees.

"Our staff felt assured when we received the 6.61 million yuan of reimbursement," said a human resource official with the Cangzhou Julong Chemical Co Ltd.

The company, which used to be a big tax contributor to the city of Cangzhou, northern China's Hebei province, has encountered a difficult time in the past two years because of cash flow problems and a stagnant market.

The government's policy has saved the company in a critical moment, said the official, adding that the reimbursement will be used for paychecks and social insurance for the employees.

According to the NBS, the urban unemployment rate at the national level in October was 5.1 percent, 0.1 percentage point lower than the previous month.

The decision adopted at the fourth plenary session of the 19th Communist Party of China Central Committee on Oct 31 stressed the importance of improving the mechanism that promotes full employment with better quality.

While the employment is stable now, it must not be taken lightly from a long-term perspective, especially considering the trade uncertainties and the influence of moving out of some downstream businesses, said Su Hainan, a researcher with the Chinese Association of Labor Science.

The country's needs for farming managers in the coming five years will reach 1.5 million people, which is another indicator of the potential of the job market.

"Nothing big would go wrong next year if we could keep employment stable," said the premier.