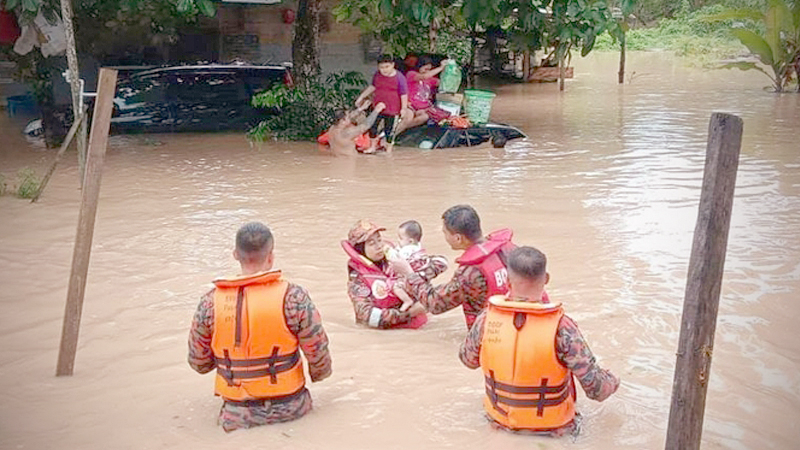 Heavy rainfall is expected over Segamat, Kluang, Mersing, Kulai and Kota Tinggi in Johor, Jerantut, Maran, Kuantan, Bera and Rompin in Pahang, and Dungun and Kemaman in Terengganu.

Northeast monsoon rains have caused floods in nine out of 10 districts in Johor as well as two districts in Pahang.

In Pahang, 1,055 people from 271 families in Rompin and 19 flood victims in Temerloh were evacuated as at noon on Monday.

Strong winds of between 40kph and 50kph with waves reaching 3.5m high are also forecast over the coastal areas of Kelantan, Terengganu, Pahang and East Johor.

This can cause seawater flood estuaries and coastal areas, the statement said.

In Kudat, Sabah, a relief centre was opened on Monday after the water level rose.

According to the Fire and Rescue Department, 124 people from Kampung Korina, Kampung Naradang, Kampung Popot and Kampung Andap were evacuated.

The Civil Defence Force said the water level of Sungai Rampai was at a dangerous level.

Last week, floods caused over 400 villagers in the Membakut and Beaufort districts to be relocated to a relief centre for four nights.