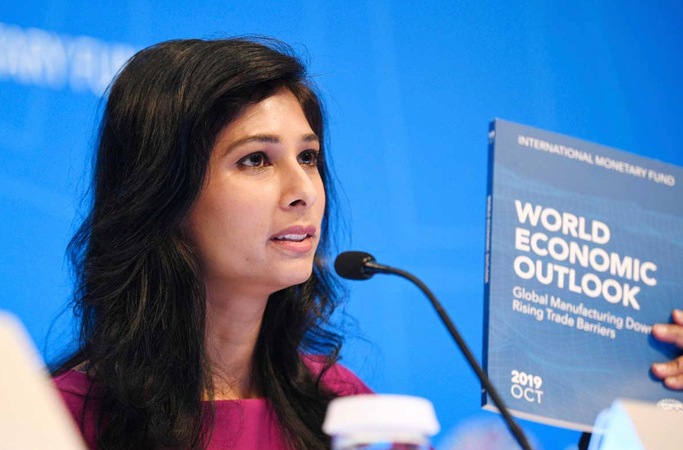 Indian economy is witnessing a slowdown for several quarters now, and country’s regulatory uncertainty is one of the reasons for the ongoing economic slowdown, said International Monetary Fund (IMF) Chief Economist Gita Gopinath on Friday.

"I believe, in the slowdown, regulatory uncertainty has played a role. That’s another factor that needs to be addressed. It’s important for India to take up reforms but to be able to do this with greater clarity and greater certainty would help,” Gopinath said at an event here in the national capital.

The IMF Chief Economist said that although reforms are important for an economy, they should come with clarity and certainty on the policies and regulations.

“Economies need reforms and they are important but there also needs to be an environment of regulatory certainty, which is the clear rules of the game, what the particular policies are and how it impacts you. There has to be clarity on that,” she said at industry chamber FICCI’s 92nd Annual Convention.

Gopinath further pointed out the opacity and confusion caused by India’s biggest tax reform, the Goods and Services Tax (GST), she said that more needs to be done to bring clarity and certainty regarding the regulations and tax rates.

“GST, which has been very important for formalising the Indian economy, but again there… certainly more needs to be done on what the rules are, what the rates are going to be…”

On her recent announcement that the IMF may sharply revise India’s growth outlook for the current fiscal, she said that some high frequency indicators do not show an increase in India’s growth in the third and fourth quarters as was anticipated earlier.

“Our expectation was that the first two quarters of fiscal 2019-20 would be a slowing scenario and then there would be an uptick in the third and fourth quarter. Looking at some of the high frequency indicators we are not seeing the kind of uptick we were projecting, so this is why I mentioned that we will be revising the numbers again in January.”