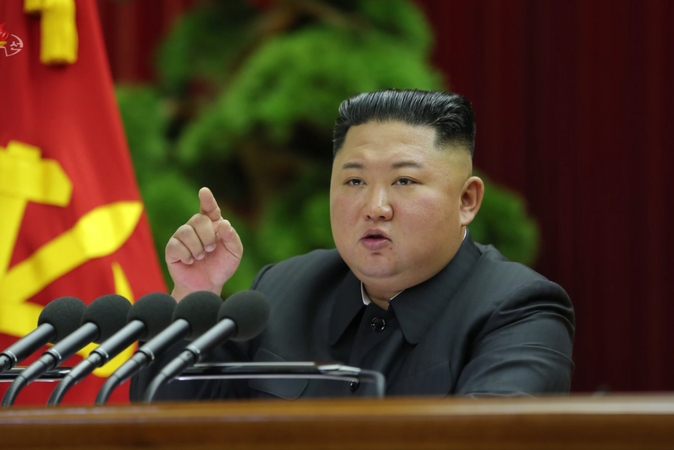 North Korean leader Kim Jong-un chaired the first part of a key ruling party meeting in Pyongyang on Saturday, amid speculation that the communist state may proclaim a “new path” in the face of stalled disarmament talks with the United States.

Attended by key party and military officers, the fifth plenary session of the seventh Central Committee of the Workers’ Party discussed “details regarding building of the state and its defense,” the North’s official Korean Central News Agency said.

“In response to changed situation at home and abroad, we intend to enhance our strategic position and empower the state, while engaging in a policy of struggle to further the building of socialism,” the state-run media outlet said.

The KCNA referred to Saturday’s session as “the first day” and said the session would be “continued.” No further details about the meeting’s outcome were provided.

Not since 1990, when a meeting of the committee extended for five days, has one of its meetings lasted longer than a day.

“The extended meeting is to demonstrate Kim’s comprehensive engagement in every affair of the state,” Shin Beom-chul, a senior fellow at the Asan Institute for Policy Studies in Seoul, told The Korea Herald.

Required to be convened at least once annually, the plenary meeting of the North’s highest decision-making body has served to unveil Kim’s major policy initiatives.

It comes as Washington maintains its stony silence on Pyongyang’s demands for relief from biting UN sanctions by the year-end deadline that Kim set.

The hermit state has warned that it will pursue a “new path” if the US continues to hold to the crippling sanctions, and Kim has urged the US to offer concessions since the Hanoi summit in February ended with no agreement.

At a subsequent meeting in April this year, Kim said he would not succumb to the US sanctions.

At an earlier meeting in April 2018, Kim and his party had adopted a unanimous resolution to demolish the now-defunct Punggye-ri nuclear test site and to halt intercontinental ballistic missile tests.

Some observers say the North’s new path could be lifting that moratorium and resuming weapons development.

Urging the US to offer concessions to resolve their differences in the denuclearization talks, the North spoke of a “Christmas gift,” widely interpreted as a hint at some kind of weapons testing.

In the run-up to the holiday, Washington flew a series of surveillance aircraft over the Korean Peninsula in case of a missile launch, but Pyongyang let Christmas pass without any provocation.

Cheong Seong-chang, director of the Center for North Korean Studies at the Sejong Institute, said the fact that the ongoing party meeting is not a single-day event signals that North Korea has important issues on the table.

“Given that the meeting goes on for two days unlike previous ones, Kim and his officers appear to have a lot to talk about Pyongyang’s policies on Seoul, Beijing, Moscow and Washington, as well as its economic agendas,” according to Cheong.

Holding up Pyongyang’s hard line against Washington and the regime’s nuclear deterrence program may have been discussed, he said.

Kim Dong-yup, a professor at Kyungnam University’s Far East Institute in Seoul, said even if the North decides to resume its weapons program, it will still put the economy high on its national agenda.

“I am not saying national defense is no longer important here. But it’s more that North Korea now sees it as a means to shore up its economy and prosperity, beyond the regime’s survival.”