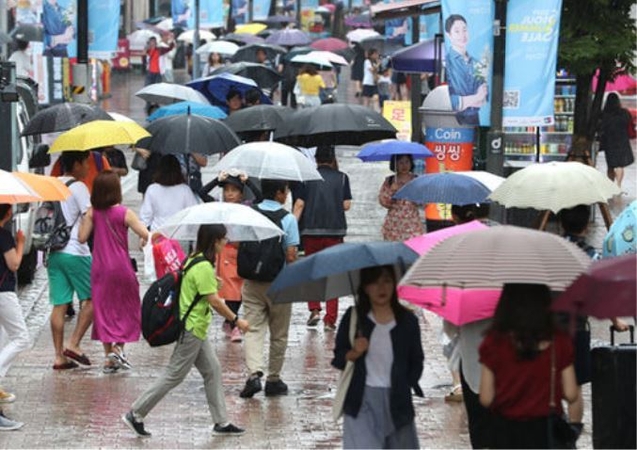 This photo shows a street in Myeong-dong, downtown Seoul last summer. The capital, alongside several other metropolitan cities, initiated the decrease in South Korea’s population in December 2019. (Yonhap)

SEJONG -- State demographic data for last month indicates that South Korea is on the threshold of the era of population decline.

According to the Ministry of Interior and Safety, the nation’s population fell by 1,566 to record 51.849 million as of December, compared to the previous month’s figure of 51.851 million.

This marked the first time in more than 10 years since April 2009 (when it posted minus 2,716) that the monthly figure fell. While the drop in April 2009 was a sporadic occurrence, the figure in December 2019 signals a continuous drop in the coming years and decades.

The forecast among some analysts on a gradual drop in the future comes from the fact that men’s population has declined for the first time in history in 2019 on a yearly basis since the government started compiling the data.

The number of male population fell by 1,313 in 2019, compared to a year earlier. In particular, the monthly figure fell for the fifth consecutive month -- minus 261 in August, minus 354 in September, minus 844 in October, minus 575 in November and minus 1,788 in December.Though the steady increase in women’s population had continued to offset the men’s figure, the number of females has also tilted toward a slowdown in growth on a monthly basis -- 2,069 in September, 2,296 in October, 1,297 in November and only 222 in December.

The women’s population has yet to post a minus figure even when the negative growth for entire population was reported twice previously -- in April 2009 and in March 2008 -- over the past decade. The two cases were led by a decrease in the number of men.

Concerning seven major cities -- Seoul, Busan, Incheon, Daegu, Daejeon, Gwangju and Ulsan -- the number of male residents fell in all of the cities in December, and the female population fell in six areas excepting for Incheon. 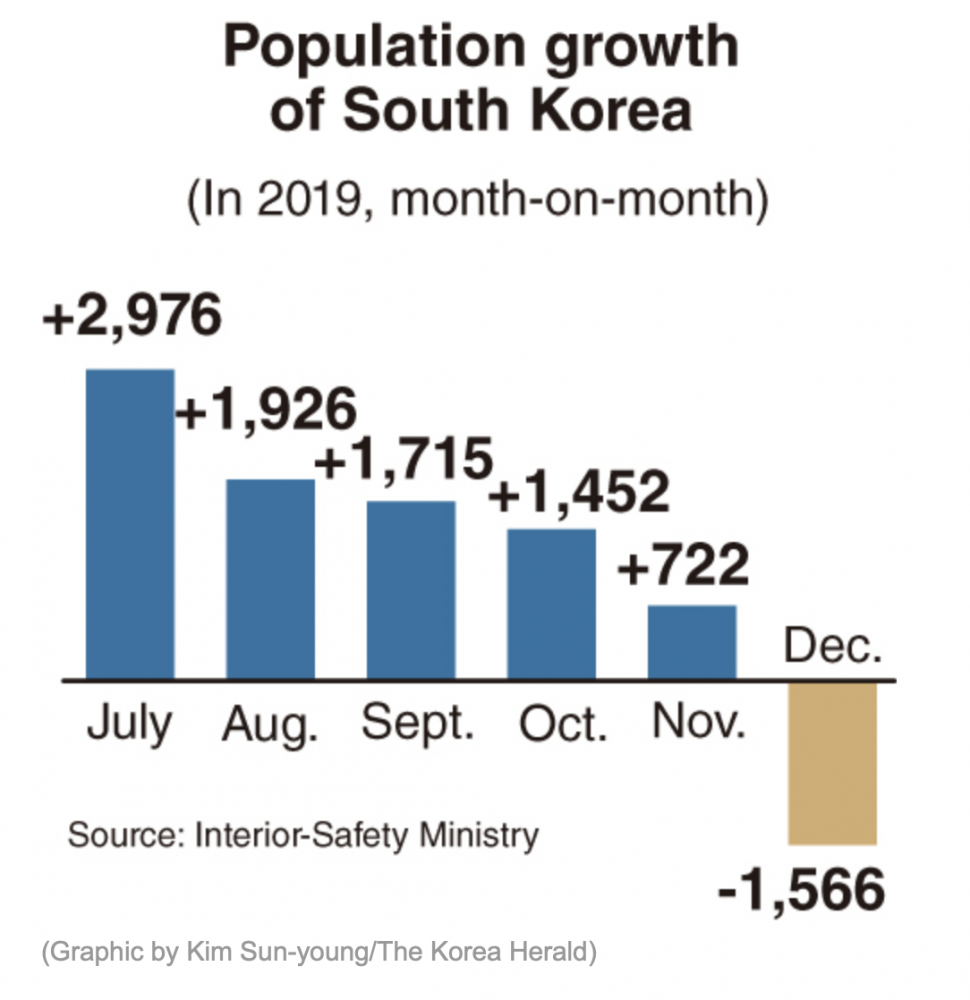 The heavy drop in Seoul and six other metropolitan cities was attributable to some citizens’ rush to new residential towns in Gyeonggi Province and Sejong, an administrative-oriented city fostered in 2012.

Nonetheless, the symptoms of a nationwide decline involving provincial areas have already surfaced in the wake of continuously sliding marriage rates and the world’s lowest fertility rates.

“The number of births began being outstripped by the number of deaths in the nation,” said a demographic research fellow. “The year 2020 may mark the first time that the population will decrease on a yearly basis.”

Meanwhile, the December 2019 figure aggravated worries over the current “aged society,” based on the standards set by the United Nations.

The number of people aged 65 or over, called seniors, in Korea exceeded the 8 million mark for the first time to reach 8.02 million as of last month, who take up 15.5 percent of the population.