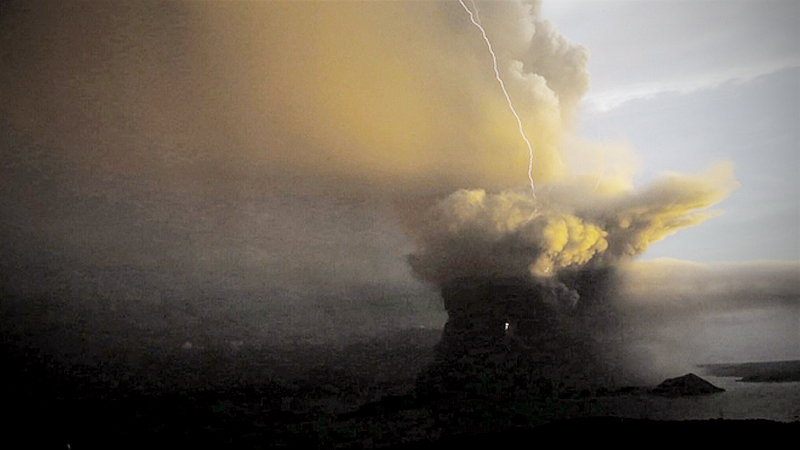 DANGER LEVEL Lightning strikes as volcanic activity intensifies on a rainy Sunday afternoon, as shown in this photo taken from Picnic Grove in nearby Tagaytay City. —RICHARD A. REYES Read more: https://newsinfo.inquirer.net/1212107/taal-volcano-erupts-2#ixzz6ArvfsgFg Follow us: @inquirerdotnet on Twitter | inquirerdotnet on Facebook

Picturesque Taal Volcano belched steam, ash and small rocks on Sunday, prompting the government to order the evacuation of residents in nearby villages and ask tourists to leave the Tagaytay, Batangas and Cavite areas as precaution for an imminent eruption.

The Philippine Institute of Volcanology and Seismology (Phivolcs) raised the danger level to 4 late on Sunday, meaning a hazardous explosive eruption is possible within hours or days.

Earlier in the afternoon the volcano, which draws many tourists to the province of Batangas, blasted steam and ash up to 1 kilometer into the sky amid signs of its restiveness in recent months.

Phivolcs also recorded a swarm of earthquakes, some of them felt and with rumbling sounds, on Volcano Island and in villages at Agoncillo town in Batangas.

The southwest part ofthe island was showered with ashfall, Phivolcs said in a statement.

There were no immediate reports of injuries or tourists being stranded in affected villages frequented by foreign and local visitors.

Presidential spokesperson Salvador Panelo said President Rodrigo Duterte had given orders for the evacuation of residents of villages near the volcano.

In a statement, Panelo gave assurance that government agencies “are now working closely with the provincial government of Batangas to ensure the safety ofthe residents, including their evacuation.”

As of 5:30 p.m. on Sunday, the evacuation, on boats and water ambulances, of close to 6,000 people from Volcano Island to the mainland towns of San Nicolas, Talisay, Agoncillo and Laurel was still going on, Alex Masiglat, spokesperson for the Batangas disaster council, reported.

Later, the National Disaster Risk Reduction and Management Council reported that 6,000 people had been evacuated in Batangas, mostly from the towns of San Nicolas, Balete and Talisay.

Local authorities had yet to evacuate residents in the lakeside towns of Batangas and in Tagaytay City in Cavite province, famous for its scenic views of Taal Volcano.

In a statement, Tourism Secretary Bernadette Romulo-Puyat asked tourists to leave the Tagaytay-Batangas-Cavite area for their safety. Local visitors began to leave under open umbrellas in the afternoon as ashfall came down on Tagaytay Ridge.

“The skies turned sepia and you could actually hear the fine ash falling on the roof like termites,” said Lawrence Ramos, a resident of Dasmariñas City, Cavite, 30 km from the volcano.

Ashfall also showered in Silang and Amadeo, in Cavite, and in Calamba, Santa Rosa and San Pedro City in Laguna province.

Classes in school at all levels for Monday were called off in the entire Calabarzon Region, Central Luzon, and Metro Manila.

At 2 p.m. on Sunday, Phivolcs raised the danger level around Taal two notches to level 3, indicating “magmatic intrusion that is likely driving the current activity.”

If increasing unrest continues, Phivolcs said, eruption is possible “within day to weeks.”

Phivolcs warned the public to stay away from Volcano Island, in the middle of the lake where the volcano lies, and asked nearby coastal communities “to take precautionary measures and be vigilant of possible lake water disturbances related to the ongoing unrest.”

A seismic swarm, or a sequence of seismic events in the area in a short period of time, began around 11 a.m. and went on for a couple hours.

At 1 p.m. a phreatic explosion caused by hydrothermal activity began at Taal’s main crater, spewing ash and steam that rose as high as 100 meters.

“But there were instances when they did not. That’s why we’ll have to keep on monitoring,” he said.

Phivolcs said it also observed a slight inflation of the volcano edifice.

Flights over Taal were suspended following Solidum’s advice to airlines that smoke from the volcano posed danger to airplanes.

The Manila International Airport Authority issued the advice of flight suspension after 6 p.m., affecting both outgoing and incoming flights.

Solidum also advised the public that Taal’s main crater is strictly off-limits, as sudden steam explosions may take place and high concentrations of toxic gases can be released from the volcano.

Taal is the Philippines’ second most active volcano, with 34 recorded eruptions, the last one in 1977, which caused no casualties or damage.

One of the world’s smallest volcanoes, Taal is among about two dozen active volcanoes in the Philippines, which lies on the “Ring of Fire,” a seismically active region of the earth that is prone to earthquakes and volcanic eruptions.—With reports from Julie M. Aurelio, Jeannette I. Andrade, Meg Adonis, Maricar Cinco, Dexter Cabalza, AP and Inquirer Research