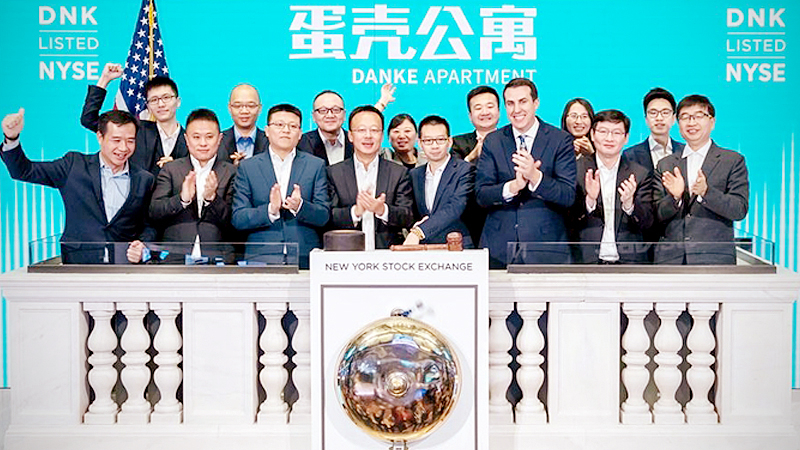 NEW YORK - Three Chinese companies started trading on the US stock market this week, among the forerunners in kicking off the 2020 US IPO (initial public offerings) market.

In the week ending Jan 17, four companies listed on the US exchanges, including three Chinese issuers and a US mortgage lender, according to IPO information platform Renaissance Capital.

The company, trading under the ticker symbol of "DNK," announced its IPO of 9.6 million American depositary shares (ADSs) at a price to the public of $13.5 apiece. The stock closed flat on Friday.

Founded in 2015, the Beijing-based company adopts a business model featuring centralization, standardization and online experience. It had established operations in 13 cities across China as of Sept 30, 2019, becoming one of the largest co-living platforms in the country with rapid growth, the company said its prospectus, citing consulting firm iResearch.

Calling the company's debut on the US exchanges "a milestone," Gao also expects the move would help the company's brand building and attract more talents.

"After a long time of preparation, we finally made the listing," Marco Lai, founder and CEO of LIZHI, a Chinese interactive podcast platform for user-generated content, told Xinhua.

LIZHI, rang the opening bell at the Nasdaq MarketSite in Times Square on Friday in celebration of its IPO. The company announced its IPO of 4.1 million ADSs at a price to the public of $11 apiece.

Founded in 2010, the Guangzhou-based company launched the Lizhi app in 2013 to allow users to record and share their lives with voices on mobile devices with the help of intuitive recording, and to reach their audience through various discovery tools.

Lai said the public listing is a key step of the company's global strategy, adding the company plans to use the proceeds from this offering to invest in product development and its Artificial Intelligence technology.

Also on Friday, I-Mab, clinical-stage biopharma company in China, made its debut on the Nasdaq.

The company announced its offering of approximately 7.4 million ADSs at $14 per share, assuming the underwriters do not exercise their option to purchase additional ADSs. Traded under the symbol of "IMAB," the stock opened on an upbeat note while finishing the session lower.

The number of Chinese firms listed on the US exchanges has increased in recent years. As of Friday, the S&P US Listed China 50 index, which is designed to track the performance of the 50 largest Chinese companies listed on US exchanges by total market cap, stood at 3,418.51, marking a 7.93-percent gain for year-to-date returns.