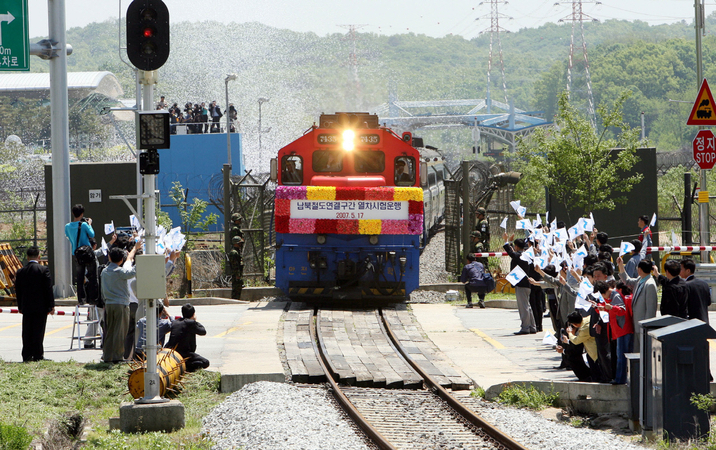 A train on Gyeongui Line crosses the border and heads toward the North Korean territory in 2007 on a trial-run. But the service was suspended since 2008. Yonhap

Seoul appears to be looking to resume a joint railway project with Pyongyang as it seeks a breakthrough in inter-Korean relations, amid halted nuclear negotiations between the US and North Korea.

South Korean President Moon Jae-in last week called for a renewed drive on various inter-Korean projects, such as cooperation on the border area, a joint bid to co-host the 2032 Summer Olympics, an inter-Korean railway and road project and individual tourism.

Ever since he floated plans for Seoul to assume an active role -- and be less of a bystander -- in dealing with Pyongyang, key officials have been calling for more engagement with North Korea, with plans to allow South Korean tourists to the North receiving the most spotlight so far.

“I believe the project we should push for most urgently, and is doable, is connecting the railway network between South Korea and the North because it will take the longest (time) to complete,” Lee Soo-hyuck, South Korean Ambassador to the US, told reporters in Washington.

“The overarching principle of the projects the government is pushing is that we should do the most we can within the framework of international sanctions.”

His comments come amid a rare display of a rift between Seoul and Washington on Moon’s renewed engagement policies with Pyongyang. The US has called on the South to discuss its plans, including on allowing individual tourism to the North, first through its working-level group to avoid weakening the allies’ united front on North Korea.

“As far as I know, the US has never rejected any (of our proposals at the working group),” he said, adding the US’ stance is that inter-Korean cooperation could help in denuclearizing North Korea.

The highly publicized project to modernize North Korean railways and roads and connect them with the South ceremonially broke ground in December 2018, following an agreement reached during the inter-Korean summit in April that year. The two Koreas carried out a joint inspection of the North’s railway and roads, but the project has been stalled due to UN-led sanctions against the North.

The government has started updating a list of equipment and supplies for the railway project, as it will need to request an exemption from the UN Security Council’s North Korea sanctions committee, to go ahead and take the materials to the North.

It plans to talk with the US, possibly through the joint working group on North Korea, for exemption on US-led sanctions if needed. During the joint inspection in 2018, the UNSC had granted an exemption for some materials that the South needs to send to the North for the project.

When asked on the process of inter-railway project, the Unification Ministry said “additional inspection is required at the moment.”

“On areas that need to be prepared internally and independently, we are continuing to prepare at working levels,” the ministry’s spokesman Lee Sang-min said in a regular briefing Wednesday.

But the main question remains as to whether North Korea will respond to Seoul’s ambitious plans.

Pyongyang has kept mum on Seoul’s latest proposals, including the resumption on individual tourism -- which the government reiterated it does not violate US-led sanctions, nor require a nod from Washington.

Following Moon’s call, the Unification Ministry has drawn up possible scenarios on individual tourism to North Korea, with allowing Koreans to use a travel agency in the third country to visit North Korea as the most realistic option.