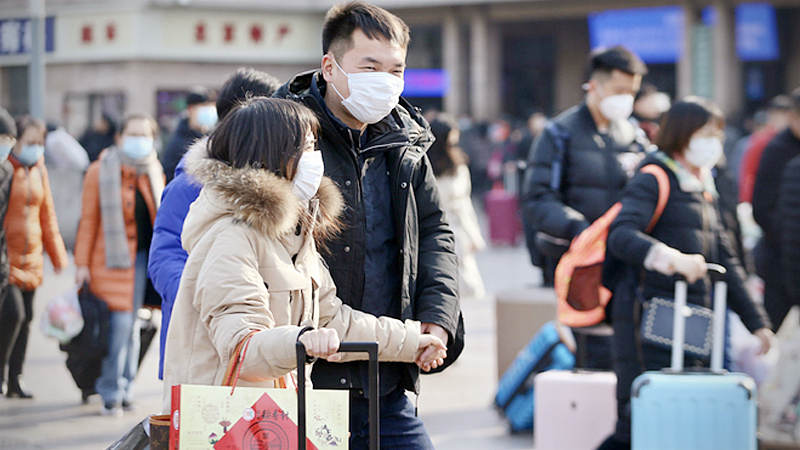 People are seen wearing masks at Beijing Railway Station on Jan 21, 2020. As of 6 pm on Tuesday, there have been five cases of the novel coronavirus (2019-nCoV) infection in Beijing. [Photo by Zou Hong/chinadaily.com.cn]

The new coronavirus in the ongoing outbreak in Wuhan, Hubei province, is likely to have originated from bats, and is genetically more identical to severe acute respiratory syndrome, or SARS, than the Middle East Respiratory Syndrome, or MERS, according to a study published online on Tuesday.

However, the new virus is neither SARS nor MERS, but a relative that belongs to a different class called the betacoronavirus, a single-strand RNA virus that can infect wild animals, livestock and humans. The new virus may have originated from bats like SARS, but there might be more intermediate hosts between bats and humans, according to the study.

The paper was published by the journal of Science China Life Sciences by researchers from the Chinese Academy of Sciences, Shanghai Jiao Tong University, Beijing Institute of Pharmacology and Toxicology, and Guangzhou Medical University.

The researchers also found that the new virus may share a similar transmission mechanism with that of SARS, which is infecting cells of the respiratory tract. However, the paper suggests the infectiousness of the new virus might be lower than SARS and its structure is easier to break apart due to some of its genetic features.

A Beijing expert in the sector who requested anonymity said the paper's model was based on test examples from the early period of the outbreak, and mutations can occur that may lead to different results.

"The purpose of the paper is not to give a definitive answer on what the new virus is, but rather to offer a direction and basic groundwork for the international scientific community to look deeper into the pathogen," he said.

"It is still too early to say how deadly or contagious the new virus is, and we should not let fear and speculations get in the way of our understanding of the situation."