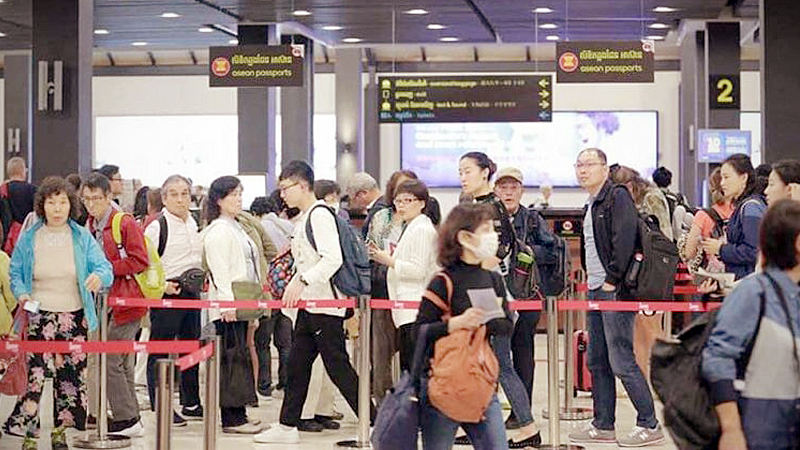 Cambodian aviation authorities on Monday announced that all flights between the Kingdom and Wuhan city have been cancelled. hun sen facebook page

By The Phnom Penh Post/ANN

Cambodia reported its first case of the deadly 2019 Novel Coronavirus (2019-nCoV) on Monday, Minister of Health Mam Bun Heng announced. He said medical specialists detected the virus in a Chinese tourist in Sihanoukville.

On January 25, Jia developed a high fever, runny nose, and other flu-like symptoms, and on Monday, Cambodian experts confirmed he had contracted the virus. His other family members tested negative.

“They travelled from Wuhan city to Sihanoukville and then took a taxi to the Independence Hotel where they stayed for two nights. They later moved to Queenco Hotel.

“In the afternoon of January 25, Jia Jianhua said he had a fever after swimming in the pool for two hours. That same day, his wife called relatives in China to tell them Jia was feeling ill,” Bun Heng said.

He said the following day, provincial authorities – including the director of the provincial department of health as well as emergency response officials of the Ministry of Health –investigated the case after being informed by Preah Sihanouk provincial governor Kuoch Chamroeun.

Jia is in a stable condition and has only minor symptoms like sneezing, Bun Heng said. He and his family have been placed under quarantine.

The authorities are now on the lookout for individuals that may have come into contact with Jia to test them for the virus. They will also disinfect places where the family stayed to eliminate any trace of it.

Meanwhile, Cambodian aviation authorities on Monday announced that all flights between Cambodia and Wuhan city have been cancelled.

This comes after Chinese authorities banned all local and international flights to the central Chinese city, State Secretariat of Civil Aviation (SSCA) standby secretary of state and spokesman Chea Aun told The Post.

On Monday, the virus claimed its 81st victim in China, according to official numbers. There are now nearly 3,000 cases in that country alone. The virus has also spread to at least 14 other nations, including Malaysia, Singapore, Thailand, Taiwan, Nepal, Japan and South Korea.

“This is not our decision or the decision of the airlines. The Chinese government was the one that decided to cancel all flights in and out of the city,” he said.

According to Chansereyvutha, Cambodia operates more than 200 flights a week to China.

Ministry spokesman Koy Kuong told The Post on Monday that they are all in good health. He said the students are receiving support from Cambodian embassies and consulates in China.

“The consuls have regular contact with the department of foreign affairs in Hubei province and the schools. They are asking them to help care for and provide food to the students. The authorities in Hubei province said they will do all they can.

“Wuhan University is providing three meals a day for foreign students free of charge. Canteens in the other schools are open as are convenient stores and supermarkets near the schools,” he said.

On Monday, China announced that it will adopt a host of measures including delaying and reducing conferences and major events, extending the Spring Festival holiday and supporting work online to curb the spread of the virus, China Daily reported.

The impact of the virus could be more severe than that of Sars 17 years ago, Thailand’s The Nation reported.

Preliminary estimates of the impact on tourism and related businesses in Thailand and other Asian nations are at around 80 billion to 100 billion baht ($2.6 billion to $3.2 billion), if the spread of the virus is contained by early March.