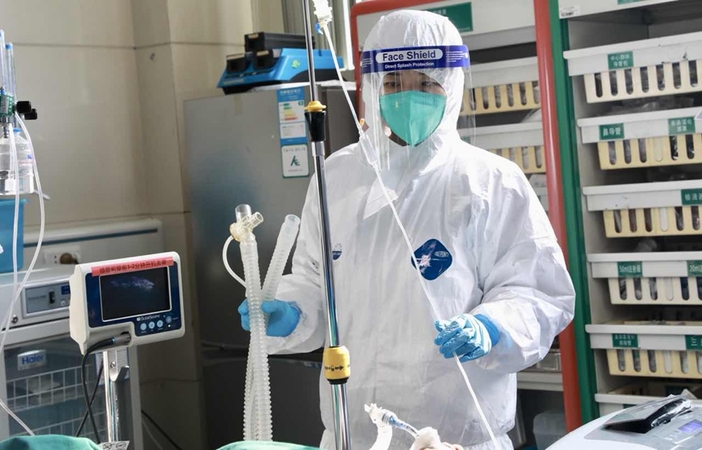 A medical worker examines a patient at Zhongnan Hospital of Wuhan University in Wuhan on Jan 28, 2020. [Photo by Gao Xiang/for China Daily]

The number of confirmed cases of the novel coronavirus rose to 7,711 on the Chinese mainland and the death toll hit 170 as of Wednesday midnight, the National Health Commission said on Thursday morning.

Among the total infections, 1,370 patients have been in serious condition and 124 people had been cured and released from hospitals.

The authorities have traced 88,693 people who have had close contact with the infected patients, and 2,364 of them were freed from medical observation on Wednesday while 81,947 are still under medical observation, according to the commission.

The number of confirmed infections rose to 10 in Hong Kong, seven in Macao and eight in Taiwan, the commission reported.

Hubei province remains the center of the outbreak. It had confirmed 4,586 cases of the novel coronavirus as of Wednesday, the provincial health commission said on Thursday morning.

The number of confirmed cases in Hubei increased by 1,032 and the death toll climbed to 162, a rise of 37, the commission said.

By the end of Wednesday, 90 patients had been cured and released from hospitals, 4,334 were hospitalized with 711 people showing serious symptoms and 277 in critical condition, it said.

In Wuhan, provincial capital of Hubei, 356 new confirmed cases and 37 new deaths were reported on Wednesday, bringing the number of confirmed infections to 2,261 with 129 fatalities in the city.

Fever clinics across the province received 32,309 people on Wednesday, according to the Hubei provincial health commission.