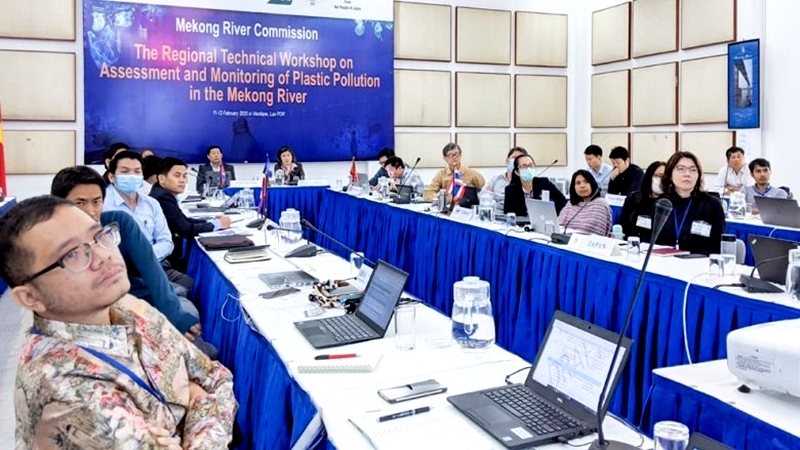 Thailand joined four countries in the Mekong region who have come together to address plastic waste leakage into the rivers.

They made the commitment at a workshop this week where the Mekong River was named as one of the 10 which channelled plastic into the ocean.

Fifty government officials and researchers from the four Mekong countries – Cambodia, Laos, Thailand and Vietnam – met from February 11-12 at a regional workshop in Vientiane hosted by the Mekong River Commission (MRC) Secretariat and UN Environment Programme (UNEP) Regional Office for Asia and the Pacific.

The meeting served to discuss assessment methodologies to study plastic debris and its sources across the Mekong, a press release said on Wednesday.

It said: In a bid to reduce plastic waste and fight plastic pollution in the Mekong region, government officials and researchers from the four Mekong countries agreed to assess plastic waste leakage into the

Mekong River system in order to inform about the current state of plastic pollutants in the region and offer policy recommendations to address the challenges.”

Ministry of Environment spokesman Neth Pheaktra welcomed the agreement to have a joint mechanism to reduce plastic being channelled into the Mekong River. He said Cambodia could not do it alone.

“The Ministry of Environment supports the study of mechanisms to prevent the flow of plastic waste into the Mekong River. So far, we have taken no concrete action apart from educating the people along the

Mekong River not to dump rubbish and improper packaging that can flow into the river during floods.

“We have to have a clear set of rules by joint agreement because the Mekong River is not the only one that crosses Cambodia. Therefore, there needs to be a mechanism and approval from other countries to find a solution for plastic pollution in the Mekong River.

“The pollution of the Mekong River is not only toxic to it but also to the sea,” he said.

According to a study on the export of plastic debris by rivers into the sea published in an academic journal Environmental Science & Technology in November 2017, the Mekong River was one of the 10 that collectively carried between 88–95 per cent of plastics into the world’s oceans.

There are also other reports around the plastic lifestyle that proliferates across the Mekong neighbourhoods without basin-wide countermeasures.

In Cambodia, about four million tonnes of waste is generated each year, about 20 per cent of which is plastic. Phnom Penh generates the largest amount of rubbish with more than 3,000 tonnes per day or over 10 million plastic bags full a day.

The MRC and UNEP are implementing the project as part of a larger technical collaboration that both parties signed last December.

“The assessment will provide the four Mekong countries with scientific evidence and information on plastic debris and plastic pollution and their threat to the environment and people,” Kakuko Nagatani-Yoshida, the UNEP regional coordinator for chemicals, waste and air quality said when she addressed the meeting.