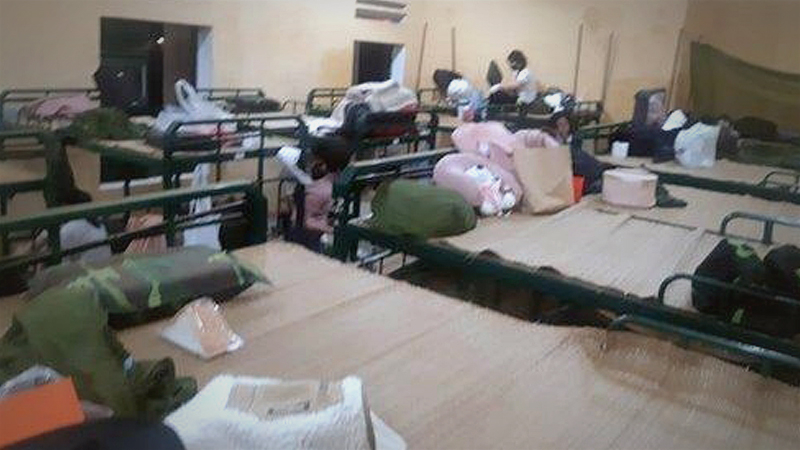 South Koreans isolated at a military facility in Vietnam. (Yonhap)

Korea’s Foreign Ministry said Sunday it was in talks with Vietnamese authorities concerning over 200 South Korean nationals placed in isolation upon arrival there without prior notice.

According to the South Korean Embassy in Vietnam, there are 117 nationals quarantined in Hanoi, 75 in Ho Chi Minh City and 21 in Danang, spread between military facilities, hospitals and some at the airport, as of Saturday evening.

The Korean travelers were removed to separate facilities without prior notice, despite being asymptomatic and from areas other than the banned Daegu and North Gyeongsang Province in Korea, the region hit hardest by the coronavirus here. Their passports have been taken away by Vietnamese authorities, according to local media reports.

Seoul’s Foreign Ministry said it is communicating with the regional diplomatic missions to come up with solutions.

Effective Thursday, Vietnam banned the entry of foreign nationals who have traveled to the southeastern city of Daegu and neighboring North Gyeongsang Province, the area that accounts for 87 percent -- 3,080 cases -- of the total infected number of 3,526 as of Sunday.

For arrivals from other regions in Korea, Vietnam said they are required to go into self-quarantine for two weeks, but instead, authorities have been transporting Koreans into isolated facilities.

Separately, an Asiana Airlines flight to Hanoi had to turn back en route after Vietnamese authorities banned the plane from landing at Hanoi’s Noi Bai Airport.

Asiana Airlines flight 729 departed at 10:10 a.m. on Saturday, but at 10:30 a.m., Vietnamese authorities denied it permission to land, and instead instructed it to land at Van Don International Airport, about 140 kilometers from Hanoi.

Asiana decided to cancel the flight and return to Seoul, as the carrier had no history of using the suggested Vietnamese airport.

Vietnamese authorities also prohibited Korean airliners from using an airport in Ho Chi Minh City, and instead to land at Can Tho International Airport, a four-hour drive from Ho Chi Minh City.

Since Saturday, Asiana Airlines and Korean Airlines have been sending empty planes with crew members, known as ferry flights, to Vietnam to bring back Korean passengers, before the country halts all visitors from here.

Vietnam’s stringent move concerns Korea, as it could spread even further to other regions. The measure arrives despite Seoul’s call to refrain from “excessive measures,” with Foreign Minister Kang Kyung-wha speaking by phone with her Vietnamese counterpart to retract the move.

As of Sunday, over 75 countries are imposing entry restrictions and special quarantine measures on those traveling from South Korea.