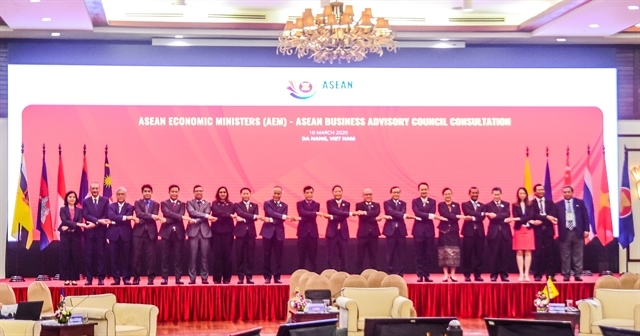 ĐÀ NẴNG — Vietnam’s 12 priorities as ASEAN Chair in 2020 were approved by other member countries at the 26th ASEAN Economic Ministers (AEM) Retreat and the ASEAN Business Advisory Council (ASEAN-BAC) Consultation Meeting on Tuesday.

Member countries also agreed 62 measures to be prioritised in the ASEAN Agenda 2020.

Minister of Trade and Industry Trần Tuấn Anh announced the results of the AEM Retreat and ASEAN-BAC meeting at a press conference yesterday.

He said Vietnam was focused on regional economic integration and connectivity, strengthening partnerships for peace and sustainable development, and enhancing the capacity and operational efficiency of ASEAN.

“This meeting provided an important chance to discuss the ASEAN Economic Community. Twelve out of the 13 priories that Vietnam proposed have been approved,” Anh said.

“The meeting once again strongly confirmed the central role of ASEAN in dealing with global challenges and trade tensions as well as threats of epidemics. The spread of COVID-19 has posed a problem for ASEAN, but it has also created opportunities for regional countries,” he said.

He said ministers of ASEAN countries also agreed to restructure supply chains to cope with the virus.

“We also discussed how the ASEAN will recover after COVID-19, and the need to build a sustainable growth model while boosting co-operation among ASEAN members and with partners including India, Canada, New Zealand and the UK after Brexit,” he said.

Anh also said six recommendations of the 37th High-level Task Force on ASEAN Economic Integration (HLTF-EI) Meeting in Hà Nội on February of 2020 were approved by ministers at the meeting.

He said ASEAN ministers focused on restarting negotiations for the ASEAN-India Trade in Goods Agreement (AITIGA) and co-operation with South Korea.

Public-private partnerships were also discussed at the ASEAN-BAC meeting on how to develop businesses.

Boosting investment in ASEAN countries through trade and development of medium-and-small sized enterprises was the main focus of initiatives proposed at the ASEAN Business Advisory Council (ASEAN-BAC) Consultation Meeting.

The meeting also raised ideas on business development in the fields of electronic trade, tourism transport and logistics.

“Despite the spread of COVID-19, participants worked hard to complete a very important agenda. I believe that economic engagements and negotiations will be finalised by the year end,” he said.

Relating to the ASEAN-India negotiations as part of the Regional Comprehensive Economic Partnership (RCEP), the Vietnamese minister said more technical talks were needed to complete the agreement by November.

Ministers of ASEAN countries agreed to boost reforms and create a framework for closer connectivity and co-operation, diversifying supply chains and partnerships.

Despite rapid growth in the past decades, the ASEAN economy was only valued at US$3 trillion per year with 9.1 per cent growth, while commodities trade reached $700 billion.

The ASEAN Economic Ministers Caucus Meeting on the Regional Comprehensive Economic Partnership (RCEP) will be held on Wednesday. — VNS