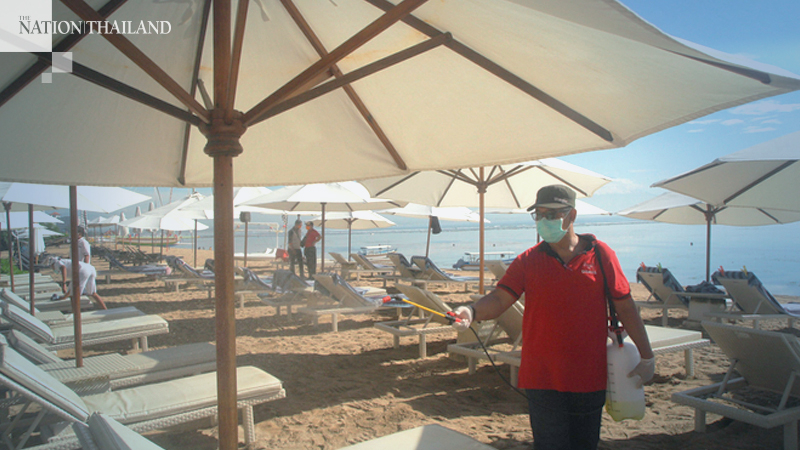 A worker sprays disinfectant at Sanur Beach, Denpasar, Bali, on March 15. The Bali administration carried out simultaneous sanitation efforts in cities and regencies across the province by spraying disinfectant in ports, terminals, hotels, markets, tourism objects and public spaces as part of its effort to contain the spread of COVID-19. (JP/Zul Trio Anggono)

Bali's provincial administration is urging tourist destinations on the resort island to suspend their operations over the COVID-19 outbreak in the country.

The administration's regional secretary, Dewa Made Indra, who also serves as the head of the provincial task force for COVID-19, said Governor Wayan Koster told all mayors and regents to close all tourist destinations in their areas, including nightclubs and other entertainment spots.

However, he said the administration would not penalize tourism places that still operated.

“We do not impose punishments. However, we remind all parties that this coronavirus is highly contagious and continues to spread; therefore, we must stay vigilant,” Dewa said on Friday.

“We should prioritize the safety of ourselves and the people around us. We have to avoid contracting the virus and spreading it to others.”

Bali's health authorities have reported three confirmed COVID-19 cases, two of which – both foreigners – died from the disease.

There have not yet been any confirmed cases of local transmission, despite Bali being a hot spot for international tourists.

Many Balinese have made a living from tending and managing tourist attractions and entertainment places across the island, a popular holiday destination for both domestic and foreign tourists.

Even so, Bali Tourism Agency head Putu Astawa was in favor of closing the island as an effort to prevent COVID-19 from spreading there, saying such a policy was necessary as the World Health Organization had declared it a pandemic.

"The policy was meant to stop the spread of the coronavirus. This is important to lighten the load on healthcare services," he told The Jakarta Post on Saturday.

Bali is gearing up to shut down to observe Nyepi (the Hindu Day of Silence) on Wednesday. The administration has decided to limit congregational rituals and crowd gatherings ahead of the holy day that marks the beginning of the Hindu New Year according to the Saka calendar. (mfp)