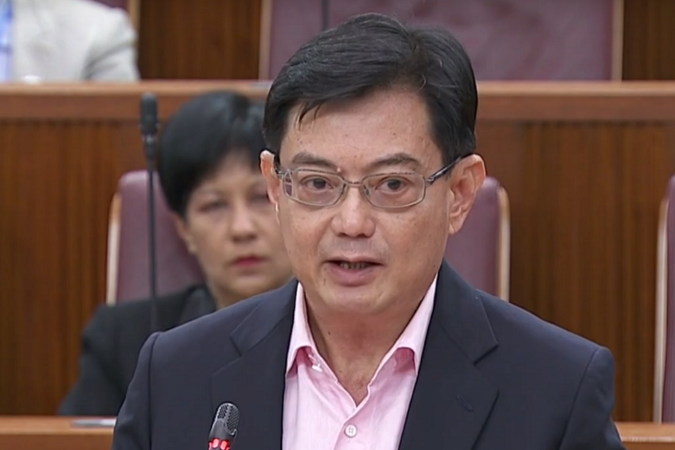 SINGAPORE - The Government is setting aside a further $48.4 billion to support businesses, workers and families as Singapore grapples with an unprecedented crisis posed by the coronavirus pandemic.

This comes on top of the $6.4 billion in measures that it announced just over a month ago to cushion the fallout from the Covid-19 outbreak.

In all, Singapore is dedicating nearly $55 billion to combat the coronavirus - about 11 per cent of its GDP - Deputy Prime Minister Heng Swee Keat said on Thursday (March 26) when he unveiled the Supplementary Budget.

Mr Heng told the House: "This is a landmark package, and a necessary response to a unique situation."

The additional $48 billion amounts to nearly half of the Government's $106 billion Budget for 2020.

It is also more than double the $20.5 billion Resilience Package announced in the 2009 Budget to tackle the global financial crisis.

Mr Heng said President Halimah Yacob has given her in-principle support to draw up to $17 billion from the country's past reserves to fund part of this $48 billion "Resilience Budget".

This is only the second time Singapore has drawn on its national reserves to fund special Budget measures. The first time was during the 2009 global financial crisis, when then President S R Nathan approved a draw of $4.9 billion to fund support measures.

Describing the coronavirus pandemic as an "unprecedented crisis of a highly complex nature", Mr Heng said: "In economic terms alone, this will likely be the worst economic contraction since independence."

And third, to strengthen economic and social resilience so the country can emerge intact and stronger.

Mr Heng noted that the coronavirus outbreak has impacted broad swathes of Singapore's economy, with the aviation and tourism sectors worst hit.

He said international visitor arrivals have nearly ground to a halt.

Consumer-facing sectors such as food services, retail trade and land transport have been significantly affected, he said.

As external demand falls and supply chains get disrupted, outward-oriented sectors such as manufacturing and wholesale trade have also been hit, he added.

Mr Tan said the second support package to tackle Covid-19 is a substantial one that exceeds the current reserves accumulated in this term of government.

"Our reserves were built up over the years through prudent spending, and were set aside precisely to cater for rainy days. The situation we are heading into looks more like a thunderstorm and not just a drizzle."

The last time Singapore registered a full-year contraction of its economy was in 2001, during the dot.com bust, when growth fell by 1 per cent.

On the supply side, locked down workers are unable to work, and a disruption in any one country will have knock-on effects worldwide as global supply chains are highly integrated.

Demand has fallen as people stay home and stop spending, he noted.

The International Monetary Fund expects a recession that will at minimum rival the one during the 2008 global financial crisis, while financial markets are being roiled by the mounting uncertainties, he said.

As an open economy that is highly integrated with the global economy, Singapore will be deeply impacted by global financial shocks, he added.

The Deputy Prime Minister recounted how there were 800 confirmed cases outside of China just five weeks ago, when he presented Budget 2020 on Feb 18.

The outbreak has escalated quickly since, and the World Health Organisation now estimates that there are more 410,000 cases across more than 190 countries.

On the medical front, many countries have implemented lockdowns to contain the spread of the virus so that their healthcare systems are not overwhelmed, he said.

"In Singapore, we are doing everything we can to keep you and your families safe," he said.

The country has stepped up its measures as the outbreak worsened worldwide, he noted.

However, the Covid-19 pandemic is likely to take at least a year to be resolved, and the economic repercussions will last even longer, Mr Heng said.

"The world is seeing successive waves of infection, and importation of infections. We must be prepared to take further, tougher measures."

Covid-19, Mr Heng said, is a defining challenge for Singapore - one that will test its social cohesion and pyschological resilience.

"The Government will take all the social and economic measures we need to keep our people safe, keep our economy running, and prepare ourselves for the recovery.

"Now, more than ever, we need Singaporeans to be strong, and ride through these challenges together."

He said he named this Supplementary Budget the "Resilience Budget", to reflect the country's determination to remain resilient in the face of these challenges.

"Come what may, no matter how daunting the challenge at hand, we will bounce back, stronger and more united than ever as we weather this storm together," he said.