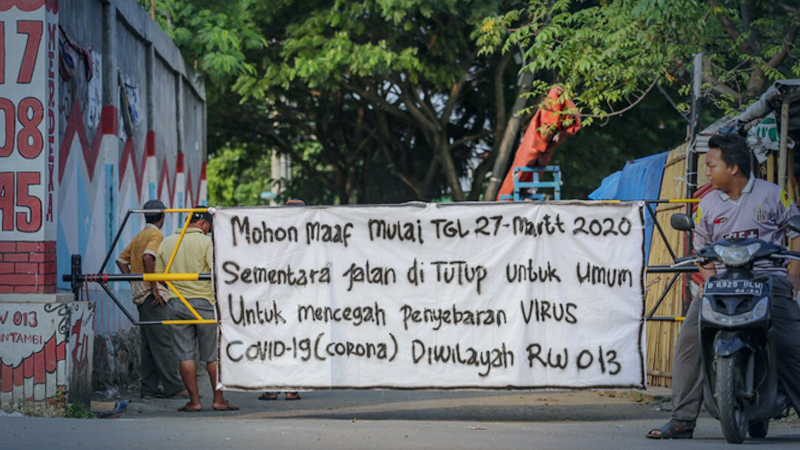 Residents in Kalideres, West Jakarta, close road access into their kampung on Saturday as an initiative to curb the spread of COVID-19. (Antara/Fauzan)

While local administrations have begun to block road access into their areas in an effort to curb the spread of COVID-19, the government has prepared to quarantine the country’s capital, which has been most affected by the disease.

The Transportation Ministry is preparing a scenario for a local quarantine in Greater Jakarta to slow the spread of COVID-19, depending on a decision expected to be made at a Cabinet meeting scheduled for Monday, a ministry official said.

Transportation Ministry land transportation director general Budi Setyadi said the ministry, in coordination with the National Police's traffic corps, had developed a plan including "stopping posts" at toll gates and along other roads to and from Greater Jakarta.

If a regional quarantine is enacted, the police will turn back those trying to enter or leave the city.

"We have not ruled out the possibility [of a local quarantine], but the decision depends on the leaders," Budi told The Jakarta Post on Sunday. "We are only acting as the implementer who creates the standard operating procedures and [plans] on what the protocol will look like."

The government has struggled to curb the spread of COVID-19 in the past three months. Insufficient medical supplies and concerns over unrest have prevented President Joko “Jokowi” Widodo from imposing lockdown in Jakarta and other provinces while limiting information about cases and deaths.

As cases passed 1,200 on Sunday, with 114 deaths, including medical workers and more discovered outside Jakarta, local administrations have started to take their own initiatives to protect their residents from the outbreak, especially those traveling from Greater Jakarta.

The government has already issued a warning discouraging people living in Greater Jakarta from leaving the city for their hometowns for the Idul Fitri mudik (exodus).

However, many have ignored the warning. Central Java, for example, has reported thousands of mudik travelers arriving in the province, including in Jepara with 1,776 arrivals, Purwokerto with 2,323 and Wonogiri with 2,625 as of Tuesday.

Central Java has reported 63 confirmed COVID-19 cases and seven deaths as of Saturday, the fifth-highest number of cases of the country’s 34 provinces.

The Tegal administration has announced that it would close road access around the city for four months after one resident tested positive.

Provincial administrations in Maluku and Papua have restricted entry through air and water ports to prevent further transmission in the provinces.

Jakarta is increasingly considered the epicenter of the virus in Indonesia, recording 675 cases with 68 deaths, more than any other province.

Banten and West Java, provinces directly linked to the capital, are the second- and third-worst hit regions with 149 and 106 cases, respectively.

While the government has revealed almost nothing about the patients and their travel records, several patients that have been reported in Central Java and other areas have a history of traveling to Jakarta and its neighboring cities.

"After the meeting [on Monday], I do not know whether it will still be a stronger warning or a complete ban. It depends on Coordinating Maritime Affairs and Investment Minister Luhut Binsar Panjaitan," Budi said.

Budi told reporters during an online press briefing on Friday that his ministry was ready to close the entrances to Greater Jakarta and other national roads. However, he said he had no knowledge about when the decision would be made.

The Post has obtained a copy of a classified Jakarta Police telegram, dated March 28, ordering the closure of the city's main roads.

Jakarta Police spokesman Sr. Comr. Yusri Yunus did not deny the authenticity of the telegram but said that the police were merely training for the possibility of a local quarantine.

"We are still implementing physical distancing and social distancing, because there have yet to be any government regulations [requiring quarantine]," Yusri told the Post on Sunday.

Medical experts and COVID-19 volunteers have called on the government to implement local quarantines in virus-stricken areas such as Greater Jakarta. They say the government's policy of physical distancing is not sufficient to contain the spread of the disease.

The 2018 Health Quarantine Law stipulates that during public health emergencies, the central government can impose "regional quarantines" on areas that experience an outbreak of a disease.

West Java Governor Ridwan Kamil has banned anyone from leaving or entering the province for mudik or traveling between cities and regencies in the province.

“Anyone who insists on traveling for mudik will directly be placed under surveillance,” he said, explaining that these people would have to self-isolate for 14 days or face police detention.

The country’s most populous province of 48.6 million has conducted mass testing among targeted groups, along with Jakarta and East Java, the province with fourth-largest number of cases in the country. (dfr)