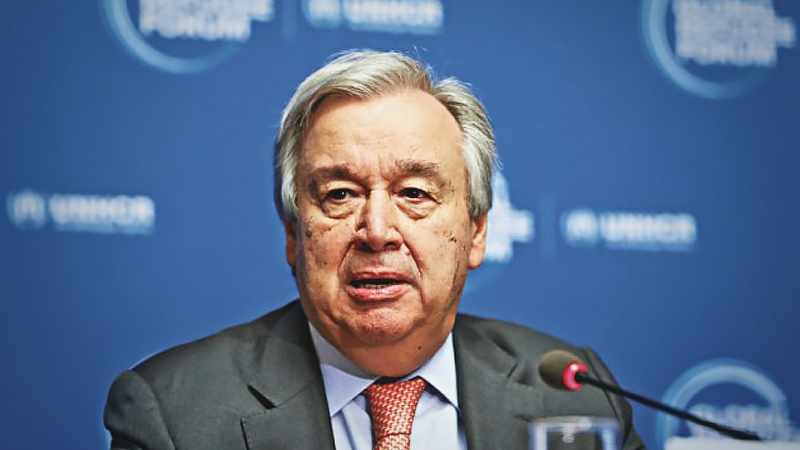 UN Secretary-General António Guterres has called for greater protection of journalists who are providing the "antidote" to what he has characterised as a pandemic of misinformation surrounding the Covid-19 crisis.

He made the appeal in a video message for World Press Freedom Day today. He underscored the crucial role media has in helping people make informed decisions.

Under the current circumstances, those decisions can make the difference between life and death, Guterres added.

"As the pandemic spreads, it has also given rise to a second pandemic of misinformation, from harmful health advice to wild conspiracy theories.

Meanwhile, Transparency International Bangladesh has called upon the government to ensure an environment conducive to free and unrestricted discharge of professional functions of media as an indispensable precondition for constitutional rights of citizens and democratic accountability of the government.

In the context of the Covid-19 crisis, the TIB has demanded the government and other stakeholders protect professional freedom and health safety of media workers in the interest of people's access to information and public awareness.

In a statement issued yesterday on the occasion of World Press Freedom Day 2020, the graft watchdog expressed concern over media workers reporting on corruption, theft, extortion and swindling of relief goods being subjected to self-censorship by various predicaments, harassment, intimidation, physical abuse, torture, disappearance and arbitrary arrests under motivated use of the Digital Security Act.

TIB Executive Director Iftekharuzzaman said, "The World Press Freedom Day this year is of much greater importance than ever. Free media is the most important catalyst to control illicit designs of those who are out to convert the Covid-19 pandemic into a festival of corruption.

"Media must be free to report not only on corruption and irregularities in relief operation on the ground, but also on different types of abuse of power and collusive corruption at higher levels where the need to fast-track procurement and distribution decisions in the crisis and recovery period may be treated as a licence for self-enrichment by a section of the politically and otherwise powerful.

"In this context it will be self-defeating to create any predicament against the media from discharging their professional role of information disclosure freely and safely," the TIB executive director said.

The USA has joined countries around the world, including Bangladesh, to reaffirm the universal right of free expression and the essential role press freedom plays in protecting democracy and keeping citizens informed and safe, reports UNB.

"The work of journalists, photojournalists, and media outlets often comes with sacrifice, including here in Bangladesh," said US Ambassador to Bangladesh Earl Miller in a statement yesterday marking the World Press Freedom Day.

"This year, we pay special tribute to those journalists who work tirelessly, often under stressful and dangerous conditions, to inform the public about the Covid-19 pandemic."

The envoy said they honour the journalists who have fallen ill from Covid-19 and their selfless dedication to public service.

"We honor the life of Humayan Kabir Khokon, a senior journalist who worked until the day of his death and posthumously tested positive for the virus. We send our sincere condolences to Khokon's family," he said.

Ambassador Miller said they honour all journalists, everywhere, who have sacrificed their lives, freedom and personal wellbeing in pursuit of truth and justice.

The UN Special Rapporteur on freedom of expression, David Kaye, has urged states to free all media workers detained because of their work and stop the intimidation and repression of the independent press.

"A free press gives people access to information of all kinds, especially critical during a public health crisis," he said in a statement on Friday marking World Press Freedom Day today.

Kaye said the theme of this year's World Press Freedom Day is "Journalism without fear or favour".

He urged all states to ensure that media workers can do their jobs without fear, keeping in mind that journalism expands people's right to know and their right to accountable government.

He said detaining journalists runs directly counter to the state's obligation to ensure an enabling environment for the media.

"At a time when disease outbreaks spread through detention facilities, detention's cruelty is exposed, imposing an additionally excessive punishment that carries with it the risk of illness and death," said Kaye.