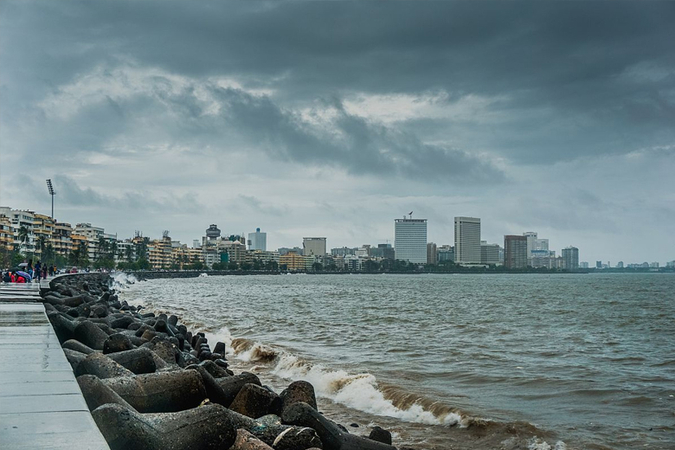 In the wake of the cyclonic storm, 15 teams of National Disaster Response Force (NDRF) have been deployed in Maharashtra. (Representational Photo: iStock)

With the pandemic-hit Mumbai bracing to face cyclone ‘Nisarga’, set to cross Maharashtra and Gujarat coasts tomorrow afternoon, Prime Minister Narendra Modi on Tuesday urged the people of the states to take all possible precautions and safety measures.

In a tweet, PM Modi informed that he has taken stock of the situation in the wake of cyclonic conditions in parts of India’s western coast.

Cyclone Nisarga is likely to cross north Maharashtra and south Gujarat coasts between Harihareshwar town in Raigad district and Daman as a severe cyclonic storm on Wednesday.

The IMD has said that it will have an impact on Mumbai.

The nearly 260 km patch between Raigad and Daman has one of the highest population densities in the country. Apart from Mumbai, it also has satellites cities like Thane, Navi-Mumbai, Panvel, Kalyan-Dombivli, Mira-Bhayander, Vasai-Virar, Ulhasnagar, Badlapur and Ambernath.

This will be the first time that a cyclone will make landfall on the Maharashtra coast in June since record-keeping began in 1891.

In the wake of the cyclonic storm, 15 teams of National Disaster Response Force (NDRF) have been deployed in Maharashtra – 3 teams in Mumbai, 4 in Raigad, 2 each in Palghar, Thane and Ratnagiri and 1 each in Sindhudurg and Navi Mumbai.

Meanwhile, another 16 NDRF teams are being deployed in Gujarat.

The IMD has said that when the severe cyclone storm Nisarga crosses the coast on the evening of June 3, it will have a speed of 105-110 kmph. Heavy rains are also expected in south Gujarat and coastal Maharashtra.

On Monday evening, Union Home Minister Amit Shah held a video conference meeting with the chief ministers of Gujarat and Maharashtra and Administrator of Dadra and Nagar Haveli and Daman and Diu, and assured them all central help in view of Cyclone ‘Nisarga’.

Meanwhile, fishermen have called back from the sea as they have been cautioned by the authorities not to venture out at sea, in view of the impending adverse weather.

Fishermen were advised not to venture into the sea till Thursday near Kerala, Lakshadweep, coastal Karnataka, and Goa as well.

The upcoming cyclone will put further stress on the security forces already burdened by the COVID-19 pandemic duties in the worst-hit Mumbai Metropolitan Region – most falling in the Coronavirus Red Zone – since the past nearly three months now.

The Central Water Commission has sounded flood alert for Sindhudurg, Ratnagiri, Thane, Mumbai, Palgarh and Nasik districts of Maharashtra, Daman district of Union Territory of Daman and Dui, Silvassa district of Dadar and Nagar Haveli and Valsad district of Gujarat.

There could be inundation in low lying areas, townships, and city areas. Wind speed could also cause damage to trees, telephone, and electric poles, IMD’s Director General Mrutyunjay Mohapatra has said.