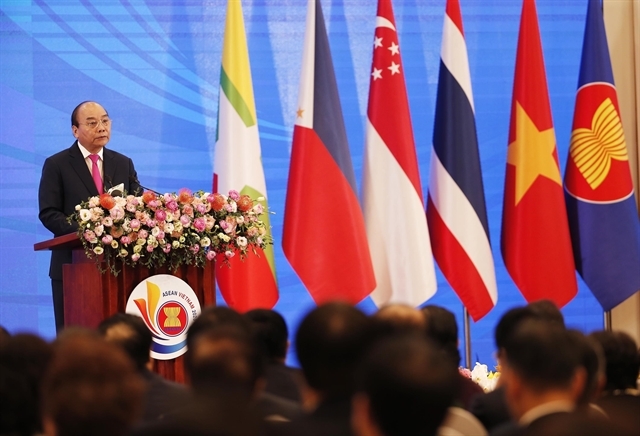 He was speaking during the opening ceremony of the regional bloc’s 36th summit held in Hà Nội Friday morning.

The summit and related meetings between Southeast Asian leaders and officials were originally set to take place in the coastal city of Đà Nẵng in April but due to the pandemic, it was delayed to late June as Việt Nam held out, hoping for a face-to-face event.

But in the end due to the severity of virus a decision was taken to hold the meeting virtually, a first in the history of ASEAN.

Drawing similarities to the 73rd session of the UN General Assembly and other high-profile meetings held virtually, the Vietnamese Government said "it reflects that norms and reality is changing not only due to technical advancements but also due to the 'unprecedented challenge' which is COVID-19".

The pandemic, which started its unrelenting spread since earlier this year, had nearly wiped out humanity’s achievements in recent years, taken away many lives and threatened the livelihoods of millions of people, PM Phúc said.

The Vietnamese Government stressed that ASEAN had taken “timely actions,” with health responses activated very early once the threat was identified.

ASEAN members had actively engaged in information and experience sharing, and well-coordinated disease control measures, thanks to a high level of political commitment, PM Phúc said, adding that the challenges helped to showcase the “fortitude of united ASEAN, full of sharing and caring.”

PM Phúc thanked ASEAN leaders and partners for supporting Việt Nam, ASEAN chair this year, in the collective response against COVID-19, especially the strong commitment demonstrated in the special ASEAN and ASEAN+3 meeting held in April on the pandemic.

He said that compared to the global situation, ASEAN member states had brought the disease under control, in terms of caseload, recovery and fatality.

“In the latter half of 2020, the heavy burden rested upon the ASEAN governments to lead their countries and the region through this period of adversity, the successful completion of the tasks would stand as testaments to the lasting values and vitality of our resilient and dynamic community,” PM Phúc said.

He expects the summit will be the occasion for member states to show strong political will and commitment rising above the challenges, to keep the pandemic under control and revitalise the economy, done in tandem with ASEAN community building and integration goals in this year.

In this summit, countries will discuss a comprehensive plan on economic recovery for the region, hasten the implementation of initiatives such as the creation of the ASEAN COVID-19 response fund, ASEAN urgent medical supplies reserve, and standard operating procedures on public health emergencies.

The pandemic, aside from its economic devastation due to lockdown and restriction measures, had exacerbated the underlying challenges in socio-political environment of the world and each region, PM Phúc continued.

“Multilateral frameworks and international law are being challenged, the growing strategic competition between the world’s powers are becoming increasingly sharp and elevated,” he said.

In the opening speech, he called out “irresponsible actions that violated international laws and posed threats to security and stability,” especially in the hotly disputed South China Sea(called East Sea by Việt Nam), where China and ASEAN countries, including Việt Nam, are forging a Code of Conduct in a bid to reduce tensions and risks of confrontation.

The Vietnamese Government leader said that after every storm, the bound stalks of rice in the emblem image chosen to represent ASEAN member states would get “tightened” even more and continue to bring forth “seeds of solidarity” in the great ASEAN family.

He expects the ASEAN leaders would adopt the chairman’s statement on vision a cohesive and responsive ASEAN, rising above challenges and promoting growth.