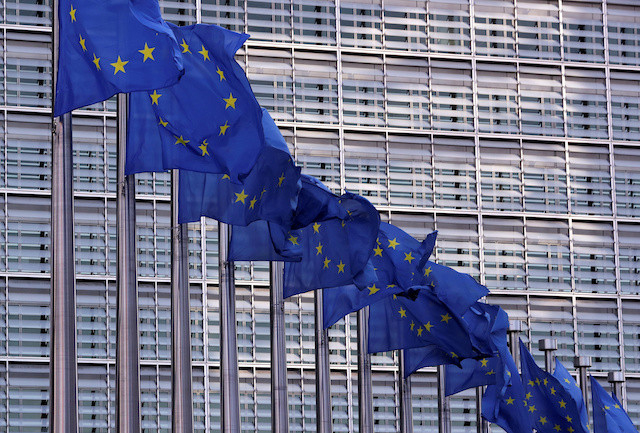 European Union flags fly outside the European Commission headquarters in Brussels, on Feb. 19. The European Union marked the 25th anniversary of its open-border Schengen agreement on Thursday with all its land borders shut or subject to heavy checks imposed to curb the spread of the coronavirus. (Reuters/Yves Herman)

Indonesia hopes to conclude negotiations for a trade agreement with the European Union next year to bolster the country’s economic recovery after the pandemic, but policies on palm oil remain a major sticking point.

“Our two economies are complementary to each other,” Rizal said in a virtual press conference held by the European Business Chamber of Commerce (EuroCham) in Indonesia on Tuesday.

The EU was Indonesia’s fourth-largest trading partner with bilateral trade worth US$26.9 billion in 2019.

After nine rounds of negotiation since 2016, Indonesia and the EU were supposed to hold the 10th round in March. However, with the pandemic limiting mobility, both sides chose to hold a virtual intersession meeting from June 15 to June 26. Indonesia initially planned to seal the pact this year.

“With this complementary nature [and] mutual interests, we can hopefully conclude it next year to provide opportunities for Indonesia and the EU,” Rizal added.

With the pandemic disrupting supply chains and halting business activities, Indonesia’s trade slowed following the COVID-19 outbreak in March. Exports decreased by 5.49 percent year-on-year (yoy) in the first half of the year to $76.41 billion, while imports fell by 14.28 percent yoy, Statistics Indonesia (BPS) data show.

Meanwhile, Indonesia’s exports to the EU fell by 12.50 percent yoy to $6.4 billion in the first half of 2020. The country’s imports from the bloc fell by 7.09 percent to $5 billion over the same period.

The pandemic-induced downturn has taken a toll on Indonesia’s gross domestic product (GDP), which expended by only 2.97 percent yoy in the first quarter, marking a significant drop from typical growth of around 5 percent in recent years.

The trade negotiation has faced a challenge over palm oil, with a document leaked last year revealing a plan by the European Parliament to exclude biofuel and bioliquid made of palm oil, but not of other vegetable oils, from the scope of the Renewable Energy Directive II (RED II). The plan unsettled Indonesia, the world’s largest palm oil producing country.

The European Commission, the EU’s executive arm, categorizes palm oil as an unsustainable product and has laid out plans to phase out its use in biofuels by 2030.

Indonesia filed a case with the World Trade Organization (WTO) against the bloc’s palm oil policy in December 2019.

With respect to texts on trade and sustainable development in the IEU-CEPA, the European Commission’s report on the 9th round of negotiation stated that “important conceptual differences remain” between both sides, and Indonesia “was planning to table additional proposals on vegetable oils.”

Aside from new regulations on trade, businesses from the bloc were expecting the IEU-CEPA to bring about “a clear set of rules” that would reduce the administrative burden on investment, said Wichard von Harrach, the vice chairman of EuroCham Indonesia.

In its 2020 position paper, for example, the chamber suggests that Indonesia relax its negative investment list, especially for horticulture businesses. The list currently caps the share of foreign ownership in the horticulture industry at 30 percent.

“In these times, investment will be considered multiple times from different aspects, and as such, we are looking for a sustainable, long-lasting, integrative investment playground,” said von Harrach.

In 2019, Indonesia booked a yearly increase of 60.8 percent to $3.7 billion in foreign capital inflow from the EU, making it the fourth-largest source of foreign direct investment.