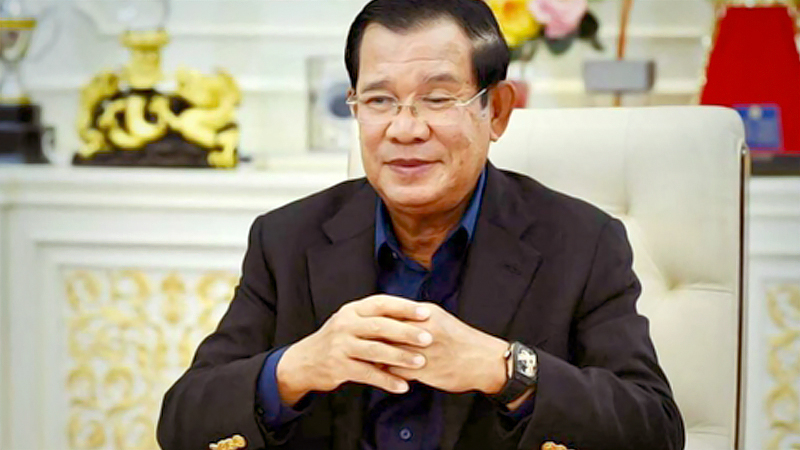 Prime Minister Hun Sen released a message celebrating the International Day of Peace on Monday, saying that some major powers and western countries had been systemically cooperating to put political pressure on Cambodia as they did in the 1970s and 1980s.

Hun Sen said pressuring Cambodia to conform to different political beliefs is a violation of the principle of equality and sovereignty between States and the principle of non-interference in internal affairs of other countries as stipulated in the UN Charter and international law.

The message read: “The great achievements that Cambodia has completed for more than 40 years have never drawn applause or admiration from some major powers and western countries.

“[These countries] have only political agendas to draw Cambodia into serving as a stepping stone towards their political ambitions.

“Additionally, they don’t hesitate to implement a double standard in assessing human rights exercises in Cambodia.

“They also use this human rights issue as a political tool or a pretext for interfering in internal affairs, violating sovereignty and independence of Cambodia and other weak countries.”

The Royal Academy of Cambodia’s International Relations Institute director Kin Phea told The Post on Sunday that foreign policies are crafted by each country to serve themselves.

Phea said Cambodia is a small country which relies on the economies of foreign countries so it must think of formulating a special foreign policy for itself.

“Since it is like this, we cannot copy the model of any country for implementation. The policy to pressure Cambodia to do this or that according to a country is a dated policy,” he said.

He said countries could not follow in the footsteps of other countries.

“If a country is forced or pressured to follow in the footsteps of another country or competition between two major powerful countries, first, it means that it is a violation of the internal sovereignty of a country.

“Second, it might make a pressured country encounter many problems and controversies. It can be plunged into war. Sometimes, civil war happens in countries caught in a cold war or when major countries interfere in internal affairs,” he said.

Cambodian Institute for Democracy president Pa Chanroeun told The Post on Sunday that in general, a small country or a developing one had always received influence from a major country or superpower.

“The important point is that the leader in countries must be wise in receiving and using that influence to transform it into national interests.

“[Leaders] put the nation first and use their Constitution as a base to guarantee the sovereignty, territorial integrity and serve citizens,” he said.

Chanroeun said Cambodia has historically been victimised by foreign influence before mentioning the Sangkum Reastr Niyum era and the period after the Khmer Rouge fell.

“Especially, the controversies between liberal and communist blocks make us lose self-reliance and we especially lose our stance on neutrality.

“We turn to a major country of the communist block, thereby making us lose balance in foreign relations with superpower countries. It makes our country plunge into internal disputes and leads to a chronic civil war.”