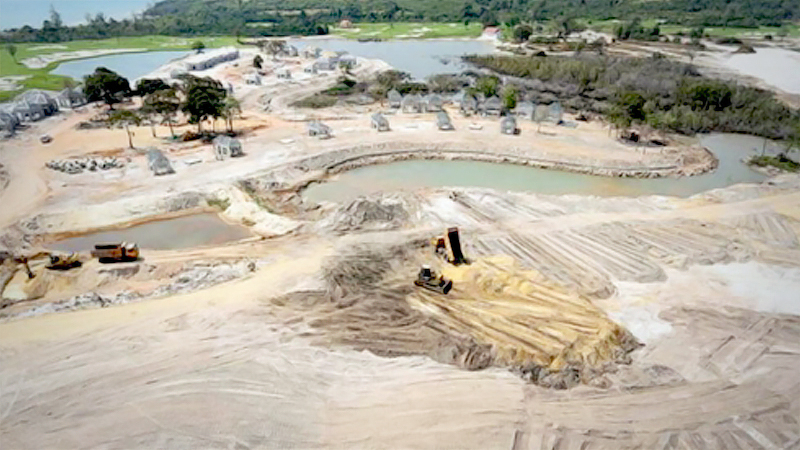 The response came after the US Department of the Treasury’s Office of Foreign Assets Control on September 15 officially sanctioned UDG for seizing and demolishing locals’ land for the project among other allegations.

US Secretary of the Treasury Steven Mnuchin alleged that after falsely registering as a Cambodian-owned entity to receive land for the Dara Sakor development project, UDG reverted to its true ownership and continued to operate without repercussions.

He alleged that UDG is a Chinese State-owned entity acting on behalf of a Chinese government official that was granted a 99-year lease by the government for 36,000ha in the south-western province in 2008.

The Council for the Development of Cambodia, which is in charge of promoting foreign and domestic investments, on Sunday expressed its disappointment over the US sanctions and provided the related facts.

It affirmed that UDG is a foreign company registered at the Ministry of Commerce of Cambodia, with 100 per cent of its shares held by the Tianjin group, which is registered in China as a private-owned enterprise in 1995. The group specialises in real estate development.

Before its investment in Cambodia, the Tianjin group had been successfully operating its real estate development business in Hainan province.

UDG filed an application with the Council for the Development of Cambodia to invest in a coastal resort development project in January 2008 which included heavy infrastructure like roads, airport and port.

After a thorough examination, inspection, and discussions, the CDC finished its due diligence and requested that the Cambodian government grant the company permission to invest.

On US allegations that Cambodia violated its law on land concessions, which limits concessions to no more than 10,000ha, the CDC stressed that UDG project did not fall under the economic land concession scheme which is why, and therefore the limit did not apply.

In general, economic land concessions are granted to companies desiring to invest in agriculture, which is why they are limited to 10000ha.

On US allegation of forced eviction, the Council for the Development of Cambodia’s statement explained that: “The lease of the development site to the UDG respects all Cambodian laws and regulations. The government followed a rigorous due process regarding the leasing of the site.”

It said the development project covers a portion of Botum Sakor National Park, which is a State public property and according to Cambodian law, that land cannot be owned by anyone. But there were several people who illegally settled in the area granted to UDG.

In consideration of those illegal settlers, the land lease agreement was reviewed to include an appropriate mechanism to resettle them and avoid forced evictions. After the lease agreement was signed, an inter-ministerial working group was set up to serve as a coordination mechanism.

“This working group collected data and examined all implications before submitting a report requesting the government’s consideration and final decision. The settlement was carried out on a voluntary basis and in accordance with all terms of the lease agreement,” the Council for the Development of Cambodia said.

On allegations that UDG destroyed the environment, it said on the contrary, it implemented a master plan which was duly reviewed, discussed and approved by inter-ministerial meetings attended by representatives of all relevant ministries and institutions after rigorous analysis and evaluation.

An inter-ministerial committee also set up a programme to conduct site inspections to monitor the implementation of the project every six months.

In the process of implementing the investment project, UDG must comply with the Master Plan, the Development Schedule and the report on Environmental Impact Assessment (EIA) approved by the Ministry of Environment.

UDG continues to be required to provide detailed development activity reports on its investment project in accordance with the Master Plan to the CDC for ongoing review, monitoring and evaluation to ensure that the project implementation is in compliance with applicable laws and regulations.

In addition, the Inter-Ministerial Committee has set up a programme to conduct site inspections to monitor the implementation of the project every six months.

On allegations that the UDG’s investment project could be used as a military base, the CDC said the Cambodian Constitution forbids all foreign military bases in its territory.

It said the government has repeatedly rejected reports that Cambodia could accept any foreign military to be stationed on its territory.

In the leased land in Kiri Sakor and Botum Sakor districts in Koh Kong province, UDG had followed their contracts strictly by building roads, bridges, ports, parks and buildings. In 2009, the government formed a committee to relocate local people and deal with compensation.

The company strictly followed the terms set in the contract, the Tianjin group stressed. It had built more than 1,000 houses, seven school buildings, many commune halls, police stations, markets, pagodas, and health centres.