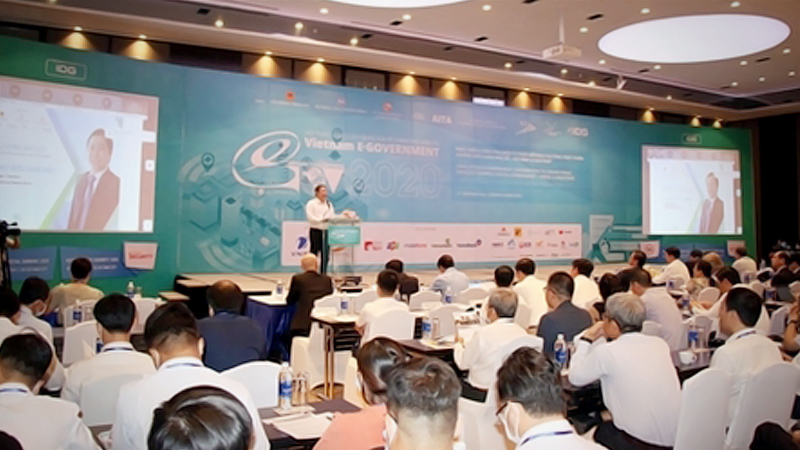 On the basis of results achieved in the process of building an e-Government, Viet Nam is preparing to move to a digital Government according to the policy set out in Resolution 52- NQ/TW of the Politburo.

The information was given at the 15th national conference on e-Government (eGov) held in HCM City on Thursday.

The conference was co-organised by IDG Viet Nam, Viet Nam Digital Communications Association, and the Department of Information and Communications of HCM City.

Speaking at the seminar, Ngo Hai Phan, director of the Administrative Procedures Control Agency (APCA) under the Government Office, said the Government Office had co-ordinated with ministries, branches, localities, IT corporations, domestic and foreign experts to focus on building and implementing many important information systems as the foundation for the e-Government development of the country in the 2018-20 period.

These information systems had been put into operation, creating a big shift in settling relations between the Government and agencies in administration.

This also provided impetus for the implementation of an e-Government and contributing to the realisation of the dual goals of economic development while minimising the negative effects of the COVID-19 pandemic on people and businesses, he said.

It was reported at the conference that the National Public Service Portal had provided 1,039 public services and 6,842 administrative procedures online at four levels by the end of last month.

The portal had also reached over 60 million visits, over 235,000 registered accounts, more than 15 million synchronised records, and over 295,000 online records. The online payment system on the portal was also deployed from March, performing over 9,000 transactions.

Currently, according to the e-Government development ranking of the United Nations, Viet Nam has increased two places, ranked 86th out of 193 countries, 24th out of 47 in Asia and 6th in Southeast Asia.

However, in order to reach the target to be in the top four countries in ASEAN by 2025 and among the top 70 countries in e-Government, there were still many things to be done, said the director, including listening to domestic and international experts and organisations in order to perfect the roadmap and choose suitable solutions for the country.

Pham Anh Tuan, Deputy Minister of Information and Communications, said that the policy on building a digital Government was outlined in Resolution 52-NQ/TW of the Politburo. Accordingly, it targeted to basically complete the digital transformation for the Party and State agencies by 2025 and complete the building of digital government by 2030.

To implement this policy, the Ministry of Information and Communications is currently preparing to submit to the Prime Minister to issue a national strategy on digital government for the 2021-2025 period.

Many Vietnamese enterprises, especially small and medium enterprises, are still not fully aware of the role of digital transformation in the fourth industrial revolution.

Many reports from the Viet Nam Chamber of Commerce and Industry (VCCI) have shown that Vietnamese small and medium enterprises currently account for about 97 per cent of the total number of enterprises, but the level of science, technology and innovation is low.

Up to 80-90 per cent of machinery used in Vietnamese enterprises is imported; of which, nearly 80 per cent is old technology from the 1980s to 1990s.

Cisco Systems, a provider of information technology products and services for businesses, conducted research on the digital growth index of small and medium-sized enterprises in Asia-Pacific.

He recommended co-ordination among departments, agencies, branches and localities in promoting and implementing guidelines and policies on technology innovation.

The State's policies in this area were not attractive enough, while procedures were still cumbersome and time-consuming, he said.

It was also difficult for businesses to access preferential capital and other support sources, said the chairman.

On the business side, Loc said that it was necessary to have the right view and a clear sense of responsibility to innovate the business model, technology in production and management models based on digital technology.

That was the key factor for businesses to move towards creative, sustainable and inclusive development goals, said the chairman. — VNS