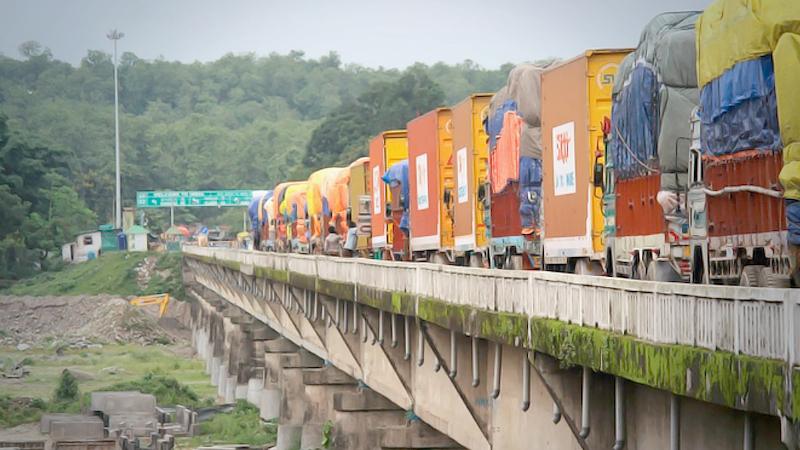 A file photo shows cargo trucks lined up on the bridge over Mechi River. Post Photo

By Anil Giri
The Kathmandu Post/ANN

With the resumptions of high-level visits between Nepal and India, the two countries are now planning to resume several trade, transit and connectivity talks stalled due to the Covid-19 pandemic and the frosty relations over the boundary dispute.

Nepali officials said that starting December, more than half a dozen bilateral talks concerning trade and transit, commerce, infrastructure, water resources and boundary working groups, are on the pipeline, mostly through virtual meetings. The dates for a few meetings are yet to be announced.

In connectivity, the high-level meetings will discuss and negotiate on agendas like upgradation of link roads for cross-border trading, amendments to the agreements on railway services, revision to the Nepal-India Transit Treaty to fix the modality of inland waterways and transshipment facilities from all sea ports.

The construction of cross-border railways at various points and negotiations on non-reciprocal preferential treatment for agricultural products are the key agendas Nepal plans to table, officials said.

At least two senior government officials whom the Post talked to said that ahead of the Sixth Meeting of Nepal-India Joint Commission at the foreign ministers’ level, both sides are scheduled to conclude key meetings on trade and transit, commerce, infrastructure, and water resources, among others.

The joint commission meeting is scheduled to take place in New Delhi. The date, however, is yet to be fixed.

“We have almost agreed to amend the Nepal-India Transit Treaty, which we were waiting for its formalisation through the letters of exchange,” Prakash Dahal, spokesperson for the Ministry of Commerce and Supplies, told the Post. “We have also agreed to amend the agreements on railway services.”

While the commerce secretary level meeting is scheduled for December 6, another joint steering committee meeting of energy secretaries has been planned for the second week of December, two Nepali officials privy to the matter told the Post.

Before the intergovernmental meeting at the commerce secretary level, the two-day joint secretary level meeting has been scheduled for Thursday through the virtual mode.

The Cabinet meeting last Wednesday had given the approval in principle for the Ministry of Industry, Commerce and Supplies to form the delegation to the meeting from the Nepali side.

An official preparing the agenda told the Post that Nepal is looking to negotiate a “huge concession” in trade and transit sectors with the southern neighbour since Nepal wants greater access to India for agricultural goods.

One agenda is direct transshipment of Nepal-bound cargo from the third countries via Kolkata port in India.

Nepal has been receiving transshipment privileges at Visakhapatnam port and using the electronic tracking system on cargo dispatched from there since August last year. Containers sent from Visakhapatnam are transported directly to the Birgunj Inland Container Depot.

However, at present importers have to produce letters of credit and paperwork issued by the Department of Commerce and the Nepali Consulate General, among others, to get customs clearance at the Indian port. No such documentation is needed at Visakhapatnam port.

The transshipment privileges will enable Nepali importers to complete the customs procedure in the final destination like Birgunj, Biratnagar or Bhairahawa and reduce hassles.

“We have been receiving preferential treatment for industrial products as of now. But in agriculture products too, we are seeking non-reciprocal treatment,” an official said.

“It’s because Nepali farm products cannot compete with Indian products largely because Indian agriculture goods are relatively cheaper due to high subsidies that the Indian government has been offering to the farmers to boost production.”

Former commerce secretary Purusottam Ojha said since Nepal has a widening trade gap with India, there are some issues that Nepal should particularly pursue during negotiations like easing the non-tariff barriers, simplifying the issue of rules of origin, quarantine among.

“We have to amend the Nepal-India Transit Treaty to fix the modality of inland waterways. The issues regarding the riverian ports that Nepal can use for inland waterways should be fixed,” said Ojha.

On the issue of development of inland water navigation facilities, India agreed in March last year to incorporate in the bilateral trade and transit treaties for third country trade via India Nepal’s proposal to extend inland waterway facilities up to its nearest navigation points.

During Prime Minister KP Sharma Oli’s visit to India in April 2018, both sides had agreed to explore the possibility of inland waterways via India and assigned officials to carry out the feasibility study.

Nepal has identified two Indian transit points for inland water navigation: Sahibganj (Jharkhand) and Kalughat (Bihar) via Haldia port up to the Nepali border from Koshi and Narayani (Gandak in India) rivers respectively.

According to the officials, they have agreed to construct more cross-border railway facilities besides the existing Janakpur-Jaynagar route. Another official at the Ministry of Commerce and Supplies said that the present cargo rail service agreement allows shipping goods only up to the integrated check posts in Birgunj.

“To access these facilities by other trade routes and integrated check posts, we have to amend the rail service agreement,” said the official.

The construction of the integrated check post was completed in Biratnagar recently through financial assistance by the Indian government. Another facility will be constructed in Nepalgunj.

Nepal is also looking for Indian assistance to construct another integrated check post at Chandani-Dodhara of Sudurpaschim Province in Kanchanpur district. A four-lane road is under construction near Banbasa area to link with Indian national highway that is expected to boost trade and commerce of that region, the official added.

India has already agreed to provide its two sea ports to Nepal—Dhamra in Odisha and Mundra in Gujarat—for third country trade but both sides have yet to complete the process through a letter of exchange. As of now, Nepal has been using Haldia in Kolkata and Visakhapatnam in Andhra Pradesh. The new agreement means Nepal can use four Indian sea ports for third country trade.

“On the issue of amending Trade Treaty, we have yet to resolve several issues but they are on the table. Issues related to trade come from various stakeholders so its details are being worked out. We have yet to share our agenda with the Indian side and receive theirs,” said Dahal.