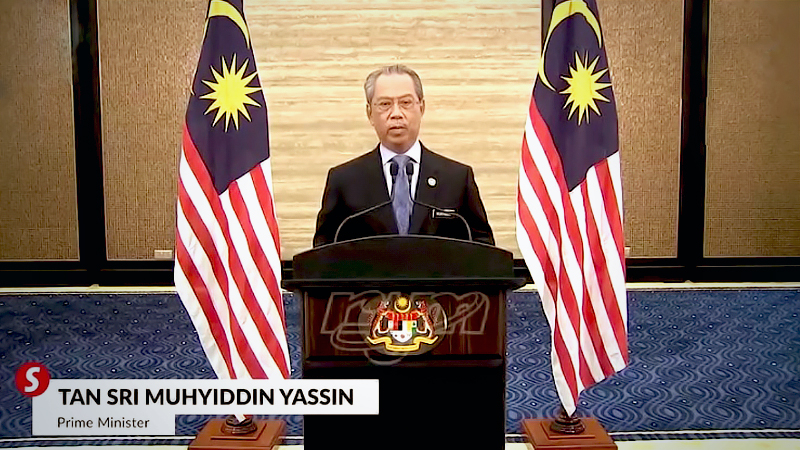 PETALING JAYA: The Emergency proclamation declared by the Yang di-Pertuan Agong is not a military coup as the civilian government will continue its functions and the country remains open to business, Tan Sri Muhyiddin Yassin has assured Malaysians.

The Prime Minister said no curfew or shutdown will be enforced.

“I would like to stress that the Emergency declared by the Yang di-Pertuan Agong is not a form of military coup.

“A curfew will not be imposed. Instead, during this Emergency period, the civilian government will continue to function.

“Again, let me assure you that the civilian government will continue to function, ” he said in his special televised live address yesterday.

Muhyiddin said the Cabinet and state executive councils will continue to function in accordance with the Federal Constitution and any ordinance proclaimed by the Yang di-Pertuan Agong.

He gave an assurance that the administrative and public service machinery of both the federal and state governments will not be disrupted by the declaration of Emergency.

Muhyiddin explained that throughout the period of the Emergency, if Al-Sultan Abdullah Ri’ayatuddin Al-Mustafa Billah Shah is satisfied that there are certain circumstances that cause the Yang di-Pertuan Agong to take immediate action, then His Majesty may declare any ordinance necessary according to the circumstances.

“Through this ordinance, assistance to be made available by the private sector includes human resources, expertise, assets, testing laboratories and facilities, ” said Muhyiddin.

He said furthermore, the necessary powers under this ordinance during the pandemic will also be utilised to facilitate businesses and overcome any regulations that make it difficult to deliver public health services quickly, efficiently and effectively.

Muhyiddin added that an ordinance may also be promulgated to provide enforcement powers to the Malaysian Armed Forces in addition to the existing powers, in accordance with the powers accorded to the Royal Malaysia Police under the Criminal Procedure Code or any other relevant law enforcement authorities.

“The Malaysian Armed Forces will also be provided with the power to assist in performing the functions relating to public health and the functions performed by the relevant civil servants.

“In line with the Emergency proclamation, the aspect of national border controls will also be tightened by empowering military personnel as well as police and Immigration personnel to arrest illegal immigrants and anyone who encroaches on our national borders, ” he added.

Muhyidin said additionally, an ordinance may also be enacted to amend the Prevention and Control of Infectious Diseases Act 1988 to enhance the effectiveness of enforcement of this Act in combating Covid-19. This, he said, includes increasing the penalties or punishments for anyone who violates the laws and regulations relating to the control of the pandemic.

Apart from that, ordinances aimed at combating economic sabotage, monopolies and excessive increase in the prices of goods during the pandemic can also be proclaimed by the King.

“Strict enforcement actions and heavier penalties can be imposed for these purposes. All the ordinances proclaimed by His Majesty the Yang di-Pertuan Agong will be gazetted and made known to the people, ” the Prime Minister added.

Despite the Emergency proclamation, Muhyiddin also assured foreign investors that Malaysia is open for business and has plans to ensure economic recovery.

“To all the stakeholders keenly monitoring what’s happening in Malaysia, I emphasise that Malaysia is open for business.

“In facing these challenging times, this period of Emergency will give us the much-needed calm and stability, as well as enable us to focus on economic recovery and regeneration.

“We remain committed to good governance during these times and we have a robust and dynamic regulatory ecosystem, ” he said.

Muhyiddin said the government has a “six-stage strategy” to ensure economic recovery, which was implemented since last March and it has been incorporated in Budget 2021.

Continued stability, said Muhyiddin, will enable the country to sustain and build upon the economic trajectory that the nation has been working hard for since last year.

“The government will ensure that economic activities will not be halted, so that the people are able to continue working, and businesses, trade and industry can remain in operation as usual.”

At the same time, Muhyiddin said, the government is committed to ensuring that the best practices of governance will be employed during the Emergency proclamation.

“National regulatory organisations that are internationally recognised such as Bank Negara Malaysia, Securities Commission and Bursa Malaysia will continue playing their role as regulators and facilitators of companies and markets, ” he added.

Muhyiddin warned that stern action will be taken against anyone who tries to undermine the government’s efforts in addressing the Covid-19 pandemic and the economy.

“I’m issuing a stern warning here, that if anyone tries to disrupt the government’s efforts in managing the Covid-19 pandemic and the economy, strict action will be taken to ensure public harmony and national security, ” he said.