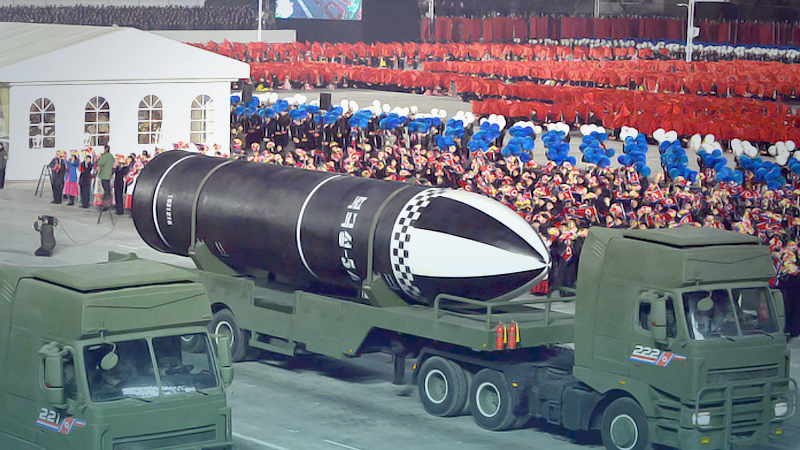 During the parade held on Thursday night at Kim Il-sung square in Pyongyang, the North rolled out SLBMs on transporter erector launchers (TEL), which it labeled as the Pukguksong-5ㅅ, along with a new short-range ballistic missile and various other kinds of weaponry.

The Korean letter "ㅅ" appears to indicate that it is a sea-based system.

"The world's most powerful weapon, submarine-launch ballistic missile, entered the square one after another, powerfully demonstrating the might of the revolutionary armed forces," the North's Korean Central Korean News Agency (KCNA) said.

The new missile looks longer than the Pukguksong-4ㅅ SLBM, which was first unveiled during a military parade in October last year.

Experts say the newest one appears to be designed to fly longer and fit for a larger-sized single warhead, while the Pukguksong-4ㅅ is to carry multiple warheads.

North Korea was known to have three types of Pukguksong missiles.

As the upgraded version of the Pukguksong-1, the Pukguksong-3 SLBM is believed to have a flight range of 2,000 kilometers or longer, and the regime last carried out a flight test of the weapon in October 2019. Pukguksong-2 is a ground-based one, not an SLBM.

The parade took place two days after the North wrapped up its eight-day congress of the ruling Workers' Party on Tuesday, during which leader Kim Jong-un said his country is developing new weapons systems, such as a nuclear-powered submarine, advanced warheads and hypersonic weapons, pledging to bolster its nuclear arsenal.

North Korea also displayed a new short-range missile during the parade, believed to be an upgraded version of its KN-23 missile, which resembles Russia's Iskander, according to the experts.

Compared to the original version, the new one has a conical warhead and the TEL added one more axle. Eyes are on whether it could carry nuclear warheads, as leader Kim ordered during the congress that nuclear weapons be made "small, lighter and tactical" while pushing for the production of super large nuclear warheads.

The North's Iskander is known to have a flight range of 400 to 600 kilometers and mainly targets South Korea. Rather than following a general parabolic trajectory, the missile shows a more complicated path by doing a so-called pull-up maneuver over the course of its flight.

The KN-23 was first unveiled in 2019 and test-launched four times that year.

But the North stopped short of displaying intercontinental ballistic missiles (ICBMs) during the military event -- in an apparent message to the United States ahead of next week's launch of a new government in Washington.

During the October event, the North showed off a new ICBM on an 11-axle TEL, which is believed to be the largest of its kind in the world.

But it is not known yet if the new ICBM is the upgraded version of the Hwasong-15 or Hwasong-16, with military sources and experts saying the weapon looks like a mock-up and has not been tested.