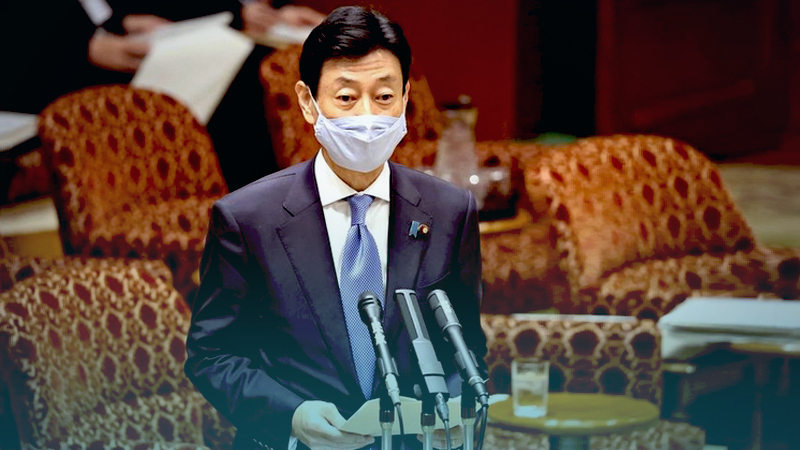 Yasutoshi Nishimura, the economic revitalization minister in charge of coronavirus measures, explains to the House of Councillors’ Committee on Rules and Administration in the Diet Building on Wednesday about the addition of seven prefectures to the latest state of emergency. (The Yomiuri Shimbun)

The latest declaration of a state of emergency was expanded to include seven more prefectures only six days after the declaration for the Tokyo metropolitan area was issued, highlighting the change in the central government’s policy as it struggles with measures against the novel coronavirus.

While the declaration now covers 11 prefectures, the central government also banned the entry of foreign business travelers from 11 countries and regions, including China and South Korea, which had been allowed as a special measure.

“We will do everything necessary with whatever it takes,” Prime Minister Yoshihide Suga said at a press conference on Wednesday evening.

The prefectures are Osaka, Kyoto, Hyogo in the Kansai region; Aichi and Gifu in the Chubu region; Fukuoka in Kyushu; and Tochigi in the Kanto region.

The governors of the three prefectures in the Kansai region had requested the declaration on Saturday due to a sharp increase in the number of infections in the area after the New Year’s holiday.

The central government initially did not consider the declaration necessary for Osaka Prefecture, as it evaluated that the prefecture’s requests to businesses to shorten operating hours had been successful. Suga on Sunday stopped short of taking action, saying that he “needed to see how the situation would develop over the next few days.”

On Monday, however, Suga decided to add Osaka Prefecture to the list after discussing the matter with Chief Cabinet Secretary Katsunobu Kato, among others.

Fukuoka Prefecture was added to the state of emergency without any request from the prefecture. So was Tochigi Prefecture, the infection figures of which some within the central government said were not as bad as in more urban areas.

The decisions came as the central government aims to avoid a wave of additional emergency declarations, which could be criticized as ad hoc.

“We’re going to make sure that everyone who needs to get on the boat gets on the boat,” a senior government official said.

Even in Tokyo and the surrounding three prefectures, where the declaration had already been issued, the number of people going out during daytime has not fallen as much as it did during the previous state of emergency last spring.

There are concerns that not only will the state of emergency not be lifted as scheduled Feb. 7, but also that the situation will become worse in other prefectures as well.

“It could be that more prefectures will be added to the list one after another,” a mid-ranking Liberal Democratic Party lawmaker said.

The central government also has changed its policy regarding business travel from 11 countries and regions as part of a special measure. At the end of last year, the central government suspended the entry of foreign visitors from all over the world except for those coming from the 11 economies, after infections with a new variant of the coronavirus were confirmed abroad. Countries such as China and South Korea were reportedly made exceptions because of Suga’s intention to place an emphasis on economic activities.

At a meeting of the LDP’s foreign affairs committee held on Tuesday, however, many voiced opinions that travels should be suspended across the board during the state of emergency. The central government decided the next day to suspend the special travel measure.