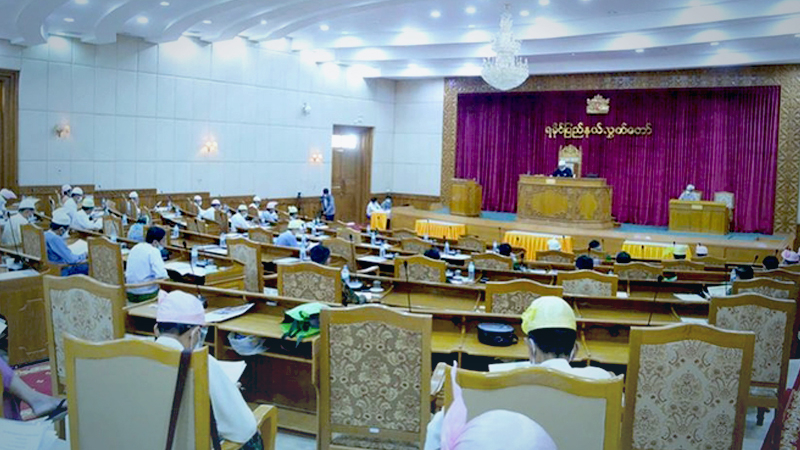 By THAN HLAING
Eleven Media/ANN

Rakhine State Parliament has approved the proposal urging the Union government to remove the United League of Arakan/the Arakan Army (ULA/AA) from the list of terrorist organizations to pave the way for achieving eternal peace.

The proposal was passed without objection during a session of the state parliament on January 14.

MP Tun Tha Sein for MraukU Township Constituency No (1) put forward the motion to the state parliament during the 15th regular session on January 11. Seven MPs discussed it.

MP Kyaw Win for MraukU Township Constituency No (2) said: “Currently, Rakhine State has a lot of displaced people who cannot go home. Conflict areas without the right to equality and decision on their own fate are hell for local people. Rakhine State is still a region without peace and stability. We don’t always need to wage war. We also should bring about political talks as the time comes.”

MP Po San for Kyaukphyu Township Constituency No (2) stressed State leaders should talk and act out of genuine goodwill if they really want peace as independence has been achieved for over 70 years.

MP Hla Thein Aung for Minbya Township Constituency No (1) said civil war had stemmed from inequality so ethnic groups had been demanding their rights by taking up arms.

“There is some progress in other armed conflict areas. They are seeing more development than Rakhine State. Then, Rakhine people had a feeling that regional progress could be achieved through armed struggle. Five years have passed, but there is no progress. Rakhine people might have changed their minds because their demands in parliament did not work. I think ULA/AA became active to make demands on behalf of the people. They want to get self-administration. Online peace talks will not work effectively. Without removal of them from the terrorist organization list, peace talks will be nothing. I think they should be officially invited for talks,” he commented.

After the debate, the parliament speaker approved the motion as there was objection from MPs.