For the last three weeks, around 60 mountaineers had battled high winds, heavy snowfall, rockfall and chilling cold to achieve what many had long believed to be impossible.

Ten Nepalis have scripted mountaineering history by standing atop the world’s most difficult and dangerous high mountain–K2–in the dead of winter for the first time.

The 8,611 metres (28,251 feet) K2, or Chhogori, the world's second-tallest peak straddles Pakistan and China and was climbed at 17:00 (local time) Saturday for the first time in winter, Chhang Dawa Sherpa, the leader of the K2 expedition, told the Post over the phone from the mountain’s base camp in Pakistan.

“WE DID IT, BELIEVE ME WE DID IT- JOURNEY TO THE SUMMIT NEVER DONE BEFORE,” he wrote in his Facebook post. “The Karakorum's 'Savage Mountain' been summited in most dangerous season: WINTER [sic].”

Thirteen of the world's 14 peaks taller than 8,000-meters had already been climbed in winter–except K2.

“This is the greatest achievement in the history of mountaineering, this is a good example of teamwork. Thanks to the mountain for granting this climb, if the mountain lets you climb, no one can stop you,” Chhang Dawa, the youngest mountaineer to have climbed all the 14 highest peaks, wrote from K2 base camp.

All the 10 climbers gathered 10 meters below the summit and formed a group to get to the top together.

“A very special moment. The whole team waited 10m below the summit to form a group then stepped onto the summit together whilst singing our Nepalese National Anthem. We are proud to have been a part of history for humankind and to show that collaboration, teamwork and a positive mental attitude can push limits to what we feel might be possible,” Nirmal "Nims" Purja, who smashed the record in 2019 for taking the shortest time to climb all 14 of the world's 8,000-meter-high mountains, wrote on his Facebook page, two hours after he reached the summit.

For the last three weeks, around 60 alpinists from a dozen countries have battled high winds, heavy snowfall and chilling cold in an attempt to achieve what many in the mountaineering community have long believed impossible.

But on Friday came a piece of good news when four Sherpas reached Camp 4 (7,800 metres), the highest altitude on the mountain humans have reached in winter.

The team then descended to Camp 3 (7,200 metres) where another six-member joined them. The final push started at 1:00am local time Saturday.

The team reached the summit after 16 hours, enduring temperatures of up to -50 degrees C (-58 degrees Fahrenheit).

While climbers were making bids to the summit, there was bad news at base camp.

Spanish climber Sergi Mingote, who was the co-leader of the K2 winter expedition, died on Saturday. He, however, was not part of the Saturday’s climbing team.

Chhang Dawa, the leader of the K2 expedition, told the Post over the phone from the K2 base camp that the veteran climber suddenly fell down to advanced base camp (5,600 metres) from Camp 1 (6,075 metres) while descending to base camp.

“Other climbers—Alex Gavan, Tamara and two from Poland helped him at advanced base camp. We sent a medical team from the base camp but unfortunately could not save him,” Chhang Dawa said.

“He was critically injured with both legs broken,” said Chhang Dawa.

Mingote, who has been attempting to climb all eight-thousanders without supplemental oxygen within 1,000 days, was the co-leader of the expedition. Mingote’s plan had come to a halt, after seven successful summits, due to Covid-19 related restrictions. 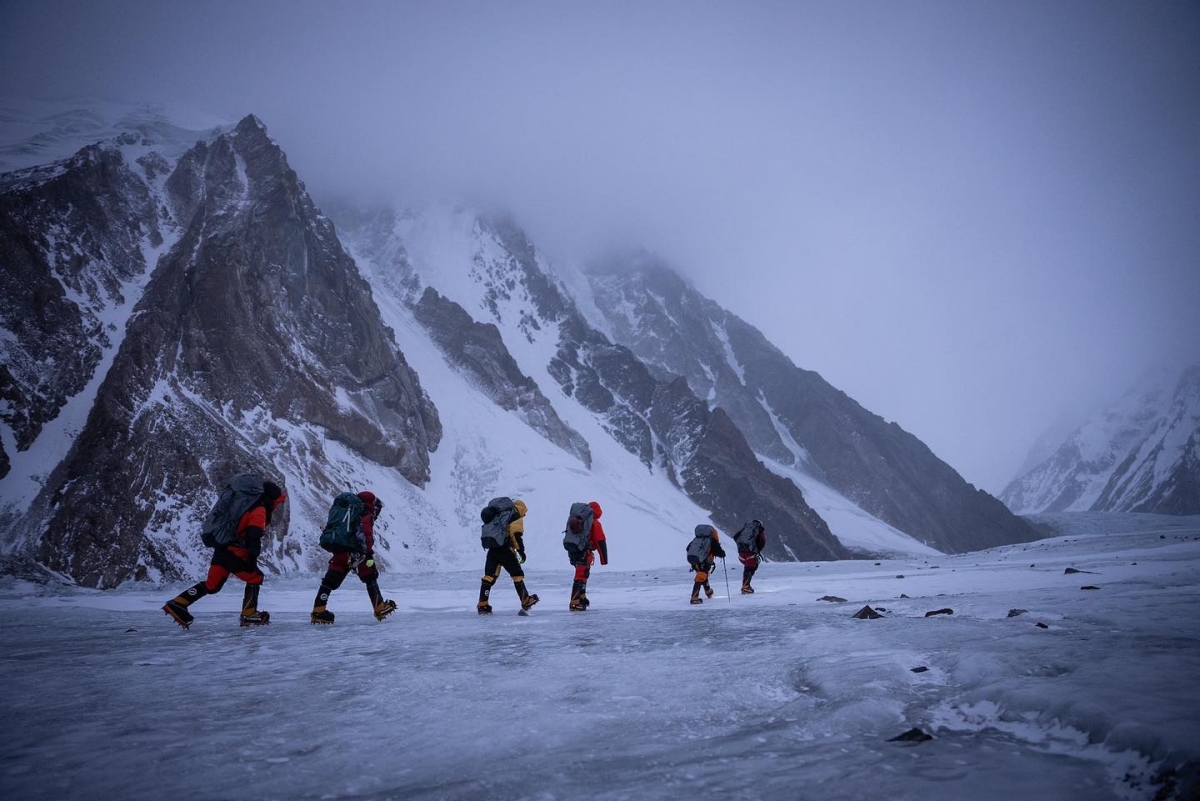 Mingma Gyalze Sherpa had planned to climb K2 without using the supplement oxygen but it is not immediately clear whether he did so or not.

According to Chhang Dawa, as all climbers had taken the supplement oxygen bottles along with them, it has not been confirmed who used it or who did not.

The climb to the top, however, had not been straightforward

When everything was going smoothly, the team on January 11 had to face a multi-day storm, which affected their plans to some extent. At Camp 2 situated at 6,760m (22,178 ft), the team was battered by heavy winds. The tents were completely ripped apart.

“Our team reached Camp 2 today [January 11] and it was a wreckage site. We found that both our tents and all equipment that we had left here for the summit plan are [sic] all destroyed and swept away by the wind,” said Purja on his Facebook post on January 11.

“We have lost everything including all our kits; sleeping bags, mattresses, heated shoe insoles, summit gloves, summit base layers, paragliding equipment, cooking equipment etc. I am devastated to be breaking this news. Now, I have to reassess and replan everything.”

There are around two dozen foreign climbers, professional and non-professional, waiting for their bids to the summit.

According to Chhang Dawa, they will decide whether to carry on or not the remaining mission, within a few days. Big winds are forecast to return after Saturday, he said.

Winds on the mountain have speeds of up to 200km per hour (124mph) that’s equal to cyclone Fani, the most severe storm that travelled more than 900 kilometres (570 miles) from the Indian state of Odisha and blew nearly two dozen tents at Everest’s Camp 2, at 6,400 metres in May last year.

The winter expedition was planned from December 21 until February 28.

Six of the climbers from other countries have planned to climb the mountain without supplement oxygen, according to Seven Summit Treks.

K2 is also considered to be a technically very difficult mountain to climb and has been dubbed “killer mountain” for the sheer number of climbers that have lost their lives on the mountain.

Eighty-four climbers have died attempting to climb K2, and only 306 have reached its summit, giving it a fatality-success ratio of roughly one death for every three summits.

On August 1, 2008, a disaster occurred on K2 and swept away 11 mountaineers. The main problem was reported as an ice avalanche occurring at "the Bottleneck", which destroyed many of the climbers' rope lines.

The Bottleneck, a perilous couloir about 300 metres below the summit, was the site of a 2008 tragedy in which 11 people were killed in an avalanche.

On 8am Saturday, Chhang Dawa wrote from the K2 base camp: “Team crossing bottle neck [sic] in Mt. K2.”

That was the last obstacle.