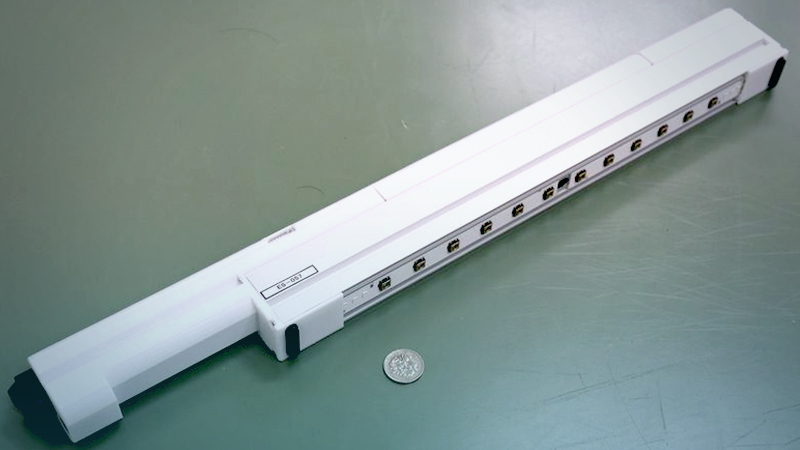 A prototype of a handheld LED-emitting device developed by Nichia Corp. is shown. It is not for sale to the public. (Courtesy of Nichia Corp.)

A Japanese manufacturer has developed a high-power LED that can effectively inactivate the novel coronavirus, the company announced.

Nichia Corp., a major light-emitting diode maker based in Anan, Tokushima Prefecture, expects the LED to be used in new products such as air purifiers.

The virus was inactivated 99.99% when exposed to a deep ultraviolet LED for 30 seconds, according to Nichia. The company conducted experiments jointly with Tokushima University Prof. Masako Nomaguchi and others.

The team discovered that the higher the output power, the greater the effect. Nichia is now ready to mass-produce LEDs with an output of 70 milliwatts, according to the company. Conventional LEDs have an output of 55 milliwatts.

The newly developed LED reportedly is capable of emitting light for about 20,000 hours.

Nichia donated prototypes of rechargeable, portable handheld irradiation devices to the Tokushima prefectural government and other entities. The device is equipped with 12 deep ultraviolet LEDs spaced 25 millimeters apart. As the coronavirus is inactivated simply by holding the device over a surface, the product can be deployed in situations where an alcohol-based solution cannot be used.

“The LEDs could have a wide range of applications, including being installed in air conditioners and air purifiers,” Hiroshi Kamada, Nichia’s executive director, said. “We hope to work with other manufacturers to develop new products.”