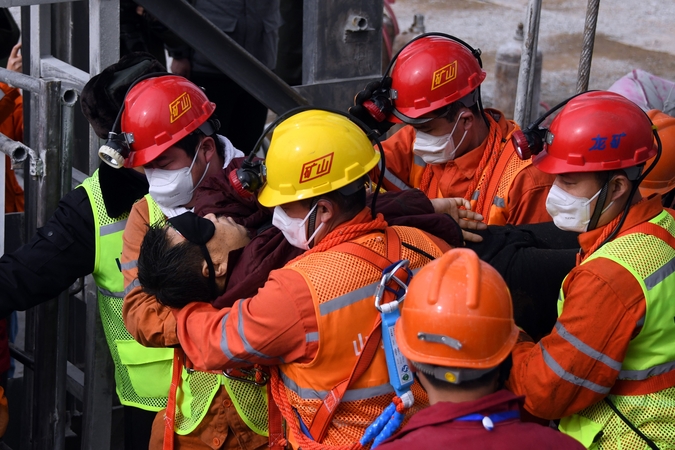 Eleven miners were lifted to safety on Sunday, 14 days after an explosion trapped 22 miners underground at a gold mine that was under construction in Qixia, Shandong province, according to the rescue headquarters.

The miners were lifted to the surface after rescuers cleared a way through the main shaft, which had been used by miners to enter and exit the mine.

"Let my family know that I am alive," one miner said.

Another put his hands together in a gesture of thanks to the rescuers.

"All of the miners lifted to the surface were blindfolded to avoid a shock from the bright sunlight," said Chen Yumin, a rescue team leader.

The first miner was brought to the surface around 11 am. He had been trapped at the No 4 section of the mine, which is 546 meters underground, and was found as rescuers were clearing the shaft. The miner, said to be extremely weak, was rushed to a hospital.

Rescuers found it very difficult during the past two weeks to clear the shaft, which was heavily damaged and blocked by debris including cables and steel wires from the explosion.

"We predicted that it could take at least another 15 days to clear the shaft due to the heavy obstacles thrown together in the shaft," Xiao Wenru, chief engineer of the Ministry of Emergency Management's mine rescue center, said on Sunday.

"But a big cavity appeared after rescuers cleared some obstacles this morning, then clearing work proceeded at high speed," he said.

After bringing out the miner trapped at the No 4 section, rescuers proceeded to the No 5 section and brought out all 10 miners trapped there. The 10 miners were found to be alive a week ago after rescuers drilled a hole to search for them.

Rescuers also retrieved the body of a miner who had shown no sign of life on Wednesday. He was believed to have sustained serious head injuries in the explosion, according to the rescue headquarters.

The search continued for the remaining 10 missing miners. No contact had been established with them as of Sunday.

On Saturday, more than 600 rescue and related personnel from 17 teams, as well as a fire-rescue squad, were on site.