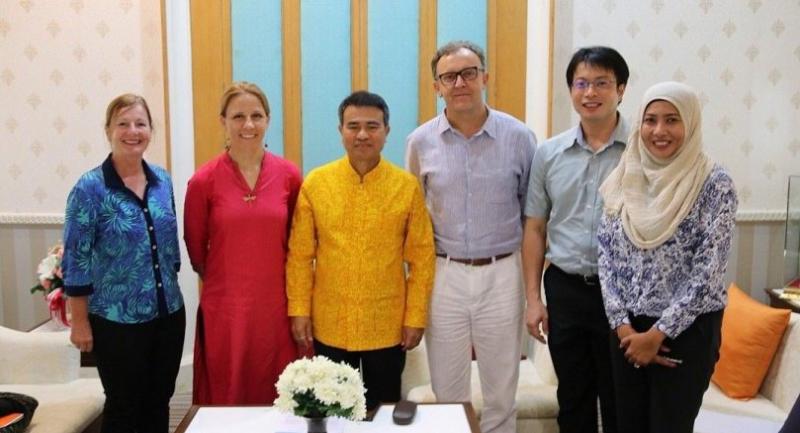 The Phuket Hotels Association has joined forces with the US Embassy Science Fellowship (ESF) Programme to tackle the critical issue of waste management in Phuket, with the aim of eliminating single-use plastics at the island’s hotels.

Founded in 2001, the ESF Programme promotes bilateral cooperation in the fields of science and technology. Since it was launched, nearly 300 scientists have provided their expertise to projects around the world.

Under the latest project, Dr Marissa Jablonski, an appointed fellow of the programme, will conduct a 60-day research project in Phuket. Her work began on July 2.

Using the latest technology and data collection tools, she will investigate plastic use and waste management at the island’s hotels and resorts.

At the end of her assignment, Dr Jablonski will create a final report detailing recommendations for the elimination of single-use plastics at all Phuket hotels and resorts.

“So much depends on the health of our oceans,” said US Ambassador to Thailand, Glyn T Davies.

“That’s why the US Embassy is very excited to engage in this unique project with the Phuket Hotels Association to reduce and eliminate marine plastic pollution. This complex challenge requires creative solutions such as this public-private partnership.

“During her time in Phuket, Dr Jablonski will work with business, government, civil society and others to raise awareness on this issue and put forward concrete solutions,” he added.

While Thailand is only the 20th most populous country in the world, it is believed to be among the top six plastic polluters.

If urgent action is not taken, there could be more plastic than fish in the world’s oceans by 2050, which would have a devastating impact on marine environments and food chains. Phuket Hotels Association president Anthony Lark commented: “Plastic pollution is one of the most critical issues facing the planet today. The world’s oceans and the creatures that depend on them are choking on plastic and it is our duty to tackle this problem.

“Our collaboration with the US Embassy is another example of how the Phuket Hotels Association is taking decisive action to preserve our local environment.”

Reducing plastic is one of the association’s primary goals. It has already set up a working group dedicated to eliminating plastic water bottles in hotel rooms and reducing other single-use plastics within hotels, such as drinking straws.

The Phuket Hotels Association also conducts regular beach clean-up events and hosts staff training and education workshops on the negative impact of plastic on the environment.

To facilitate this, the association has even translated and created Thai subtitles for the documentary “A Plastic Ocean”, in partnership with the Plastic Oceans Foundation.