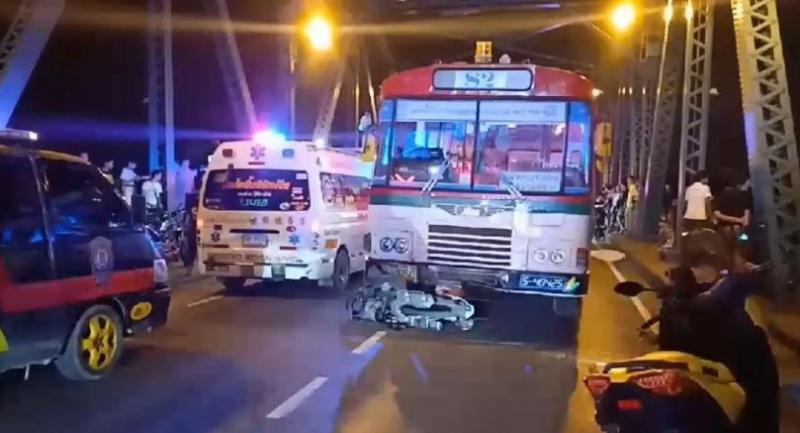 Two teenage motorcyclists, one of them a film actor, were killed early Tuesday morning when they collided head-on on Bangkok’s Memorial Bridge. Police said Thon Buri Rajabhat University freshman Thitiwat Theeraparp, 19, who appeared in the movie “Luang Phi Jazz 4G”, swerved to avoid hitting a bus and collided with an oncoming motorcycle driven by an 18-year-old man identified only by the first name Thanawat. Pak Khlong San police led by deputy superintendent Pol Lt Colonel Danchai Toon-ong were on the scene soon after 3am.

Thanawat’s bike was lodged under the front wheel of the Route 82 bus that Thitiwat had served to avoid.

Eyewitnesses said seen Thitiwat and four or five other motorcyclists gathered on the bridge. The actor had sped off towards the Thon Buri side of the Chao Phraya River with his front wheel airborne when the accident occurred.

Danchai said no charges had been filed pending further investigation, including an interview with bus driver Boonmee Insap, 53.

Thitiwat earned money selling “big bikes” of the type he was driving – motorcycles optimised for speed and acceleration – via a Facebook page that has 2,000 followers.