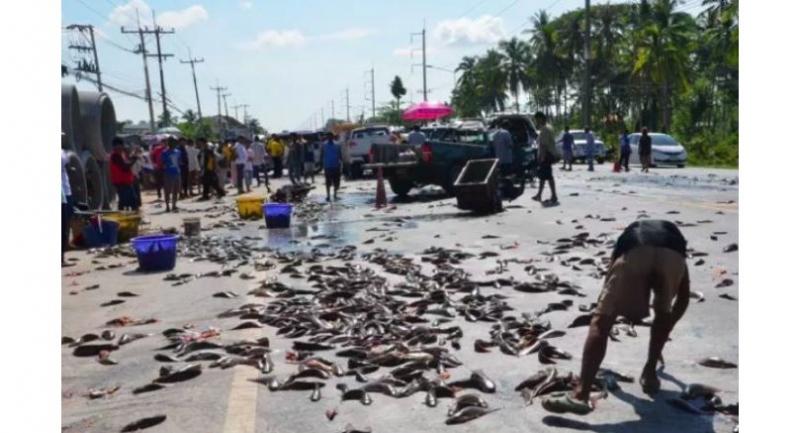 A woman was killed and nine other people injured in a pileup involving four pick-up trucks, a sedan and two motorcycles on a road in Nakhon Si Thammarat on Tuesday morning, police said.

Police said the accident happened at 9am on the Nakhon Si Thammarat-Pak Phanang road in front of the 17th regional office of the Government Saving Bank in Tambon Pak Nakhon, Muang district. Pennapha Boonrodchu, 43, was killed by a broken neck when her motorcycle was hit by a pickup after the four trucks piled up on one another. Pennapha also suffered broken limbs from the impact.

Pennapha was about to make a turn into the bank when the accident occurred.

Another motorcycle was also hit and the rider injured, police said.

Police have yet to investigate the accident cause and determine charges. The pickup that hit and killed Pennapha also hit a car parked roadside.

One of the pickups was carrying hundreds of kilograms of catfish, which spilled on the road.

The injured people were rushed to Nakhon Si Thammarat Hospital.